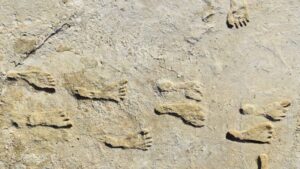 Ancient human footprints indicate people may have walked beside a New Mexico lakeshore as far back as 23,000 years ago.
(Photo courtesy of National Park Service)

NEW MEXICO—Remarkable claims are often made about the ancient habitation of the Americas, but such claims often face extreme criticism from the scientific community because they lack the hard evidence science relies on for verification—artefacts, human remains, or indisputable evidence of human occupation. Not so, in the recent New Mexico finding of human footprints at White Sands National Park in New Mexico.

In September researchers revealed they had discovered ancient human footprints, likely those of children, along an ancient New Mexico lakeshore. They dated the footprints between 21,000-23,000 years old. Although the discovery has not had the opportunity to be sufficiently peer reviewed, there is a fair chance the claims of the researchers will hold up, and the footprints will represent the oldest verified evidence of human presence in the Americas.

Tom Higham, an expert on radiocarbon dating at the University of Vienna said, “The evidence is very convincing and extremely exciting. I am convinced that these footprints genuinely are of the age claimed.”

At the time the tracks were made, New Mexico was a much wetter climate, a forested world with little resemblance to the present-day arid reality. Extinct megafauna roamed this landscape: mammoths, giant ground sloths, saber-toothed cats, dire wolves.

The tracks do not tell us who these people were, how they lived, where they came from, but they are irrefutable proof people walked the shores of that ancient lake, the only question being, how long ago? This is where radiocarbon dating comes in. Like many sciences, the accuracy of this dating technique has improved dramatically since it was first developed back in the late 1940’s at the University of Chicago by Willard Libby. The researchers finding the footprints at White Sands are on firm scientific ground with their claims, unlike some previous claims of ancient human occupation of this continent.

In 2017 it was claimed that evidence had been found of human habitation at a site near San Diego, California, controversially dated at 130,000 years ago. These claims were not backed by the standard criteria previously listed and have met with stiff criticism and skepticism, typified by the remarks from archaeologist Tom Dillehay of Vanderbilt University: “For one, the paper doesn’t satisfyingly rule out the possibility that natural processes carried the large rocks to the scene. Nor does it fully rule out the possibility that the wear patterns on the stones were a result of rocks bumping against one another in a stream. When you put the total package together, there’s certainly more evidence to reject [the study] than accept it.”

Tribes were quick to jump on the San Diego site as evidence that tribal occupation of North America is not only ancient but that tribes originated here. However, the researchers threw them a curveball by then claiming that the ancient people from the San Diego site were probably Neanderthals.

Previous peer reviewed evidence of human presence in the Americas dates back 16,000 years, and although an additional antiquity of 6000 years from the New Mexico discovery is considerable, it is a far cry from establishing human origin in the New World. The oldest proof of human occupation is Arlington Springs Man who was found at Santa Rosa Island off the coast of California. His thigh bones are dated at 13,000 years old. Europe is rife with hard evidence, artefacts, bones, campsites, villages, cave paintings, to verify ancient occupation, but even this evidence fails to establish these ancient peoples originated in Europe. Even the evidence of Neanderthals, going back some half a million years, does not indicate origin.

The only hard evidence of human origin can be traced back to Africa, although recent findings in Southeast Asia have opened science to the possibility of human origin there, but this is also considered speculative at present.

Tribes in both Canada and North America have their own accounts of who they are, where they came from and how long they have occupied this continent. Science does not recognize tribal myths or superstitions as verification, although they can serve as compelling evidence given the right circumstance. What is needed to establish a tribal presence before 23,000 years ago in North America are artefacts or bones, which at present, cannot be found. To establish origin, is even more problematic, as it requires a fossil record, such as exists only in Africa, tracing the presence of modern man back to over 200,000 years ago in South Africa, and human origin back to previous species dating back several million years.

Two previous incidents illustrate the problems both tribes and scientists face when it comes to determining the ancient past. Back in 1996 remains of 9000-year-old Kennewick man were found in Oregon. Archaeologist James Chatters claimed he was related to the Ainu of Japan and was not Native American. These conclusions were later backed up by anthropologists Joseph Powell and Douglas Owsley. The nearby Colville tribes claimed the remains were their ancestor although they had no scientific argument to back up that claim, they did have a wealth of ancient history to draw upon.

But science is forever challenging and correcting itself, and this held true with Kennewick Man. Improved techniques in dating ancient DNA confirmed that Kennewick Man was the ancestor of the nearby Coleville Tribes. Although this does not lend any credence to the accuracy of ancient tribal myths and histories, it does show that science can be way off base in its findings and assertions, although it was more science that proved that in the Kennewick case, not the arguments of the Coleville tribes.

Last year, DNA analysis showed a distinct and bizarrely fascinating relationship between three populations of grizzly bears and three Native tribes with different languages along the coast of British Columbia.

“We and the bears have a lot of the same needs,” said Jennifer Walkus, a Wuikinuxv scientist on the research team, “and it makes sense that we stay fairly close to one area and we have enough resources to feed us. It’s definitely in line with the fact that most First Nations consider bears to be family. That is something that we’re very closely tied to.”

The findings indicated a given bear population tended to adhere to the same territory as a given tribe, and in three distinct cases. It has not been scientifically determined why this is the case but many aspects of science, especially in quantum physics, although observable, are unexplainable.

What it does not show is that there is any DNA relationship between bears and humans. Only that their behavior patterns, in an area where they were dependent upon similar resources for survival, were similar. Many tribal activists, however, like Susan Harjo, were on Facebook touting that this finding established a link between bears and humans beyond behavior patterns, which it does not. That link may or may not exist, but this study did not address it.

The significance of the ancient footprints found at White Sands in New Mexico, in light of the many ups and downs of previous claims of ancient human occupation, may render them the single most important New World archeological discovery in history. They may have opened the door to a scientifically verifiable deeply ancient past that tribes have long held as being the true history of this continent.