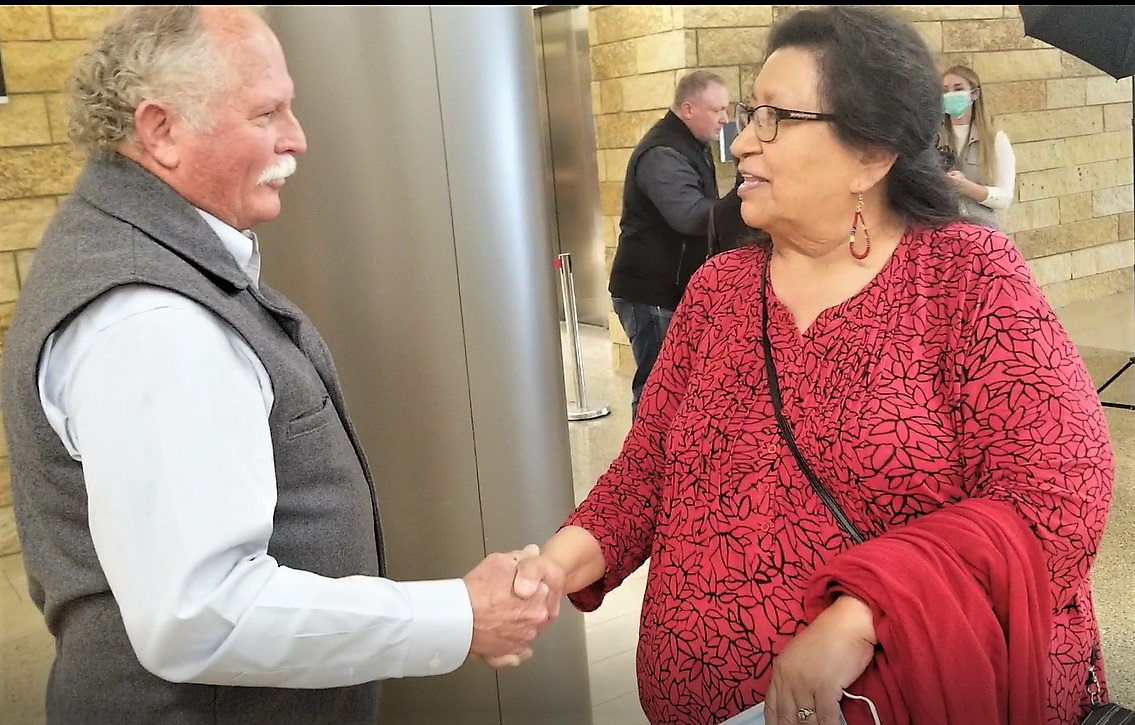 RAPID CITY – Planners at Monument Health were discussing with South Dakota Artist Laureate Dale Lamphere the sculpture they commissioned him for their new Rapid City Hospital lobby when Jane Murphy, his wife and business partner, said to him:

“You get plenty of commissions. Why don’t you share?” That’s the way he explained the participation of 20 area artists in the “Community Tapestry,” as they unveiled the piece at the new lobby of the hospital’s Fifth Street entrance on April 20.

During the event, the artists gathered to see the completed piece for the first time and talk about the mixed media project. All the contributors submitted testimony with their pieces, explaining, “What Healing Means to Me.”

In the call for submissions, they proposed their concepts for Lamphere’s consideration. He guaranteed $100 for each proposal, joking that some he received were “fresh off the refrigerator door.” The selected contestants received additional remuneration for the completed works.

One of them, Anita Afraid of Lightning created a miniature all-cotton star quilt using the strip technique and stretching the fabric taut with a gilt frame. A Rapid City resident enrolled in the Cheyenne River Sioux Tribe, she said she learned the technique from elder women at a quilting circle.

She met Lamphere years back when he visited the sewing bee while he was working on his “Dignity” statue, a 50-foot-high semblance of a Lakota woman dancing with a star quilt, which is located on a high bluff of the Missouri River outside Chamberlain.

For the “Community Tapestry”, Lamphere supplied her and the other artists with a palette of colors from which to choose. She picked a green for the background, alluding to spring and the feeling of renewal ultimately achieved by healing.

The star design complements the green, using swatches of yellow and sage to represent medicine. The center and star tips are red, her favorite, and meant to signify closure sought in the process of healing relatives of the missing and murdered, she told the Native Sun News Today.

Sewing and beading are healing for her in that they relieve stress, she said. “Healing for me is not only reconciling who I am with my culture, my ancestral land but also to my family,” she added. “When I think about star quilts, I think of my mother and times she would quilt. Memories of her and who she was and what she stood for are the foundations to my healing. Healing also allows me to help others, such as teaching others to sew. This is healing to me.”

Her thoughts on healing, and those of all the contributing artists, will be encapsulated in an interactive digital display accessible at a lobby kiosk. Afraid of Lightning says she hopes her family members will go see the artwork at the hospital. However, she clarified, “I just want them to come and visit. I don’t want them to need it.”

Polished aluminum panels, some of them gold-plated, form a backdrop tying together the diverse contributions that make up the tapestry. “It was quite an adventure hanging this piece,” Lamphere said. While he played the role of curator, he credited his “right-hand man” Andrew Roltgen for operating a hoist to raise 10 100-pound panels and fasten them to the wall in their two-story-high space that is 14 feet wide.

Roltgen said the process was “challenging.” It entailed laying out the design parts on the artist studio floor to determine the best arrangement before transporting the separate pieces to their destination and hanging them.

Media used in the “Community Tapestry” range from oil paint and pencil to beads, ceramics, textiles, rock, pottery, wood, metal, enamel, and glass. Monument Health promises to host a public event “to introduce the ‘Community Tapestry’ to the community.”

Former Gov. Dennis Daugaard appointed Lamphere to be South Dakota Artist Laureate in 2014. The position had been vacant since the 1983 death of Oscar Howe who received the honor in 1954. Lamphere was reappointed in 2019. Lamphere recently received the American Institute of Architects South Dakota Champion of Architecture award for “bringing great public art to the people of South Dakota and beautifully articulating the intersection of art and engineering.”

Direct observation of nature is the guiding force in Lamphere’s work, he says. In 51 years of his career, he has completed 60 major public sculptures – located across the country from the Basilica of the National Shrine in Washington, D.C. to the City of Burbank, Calif.