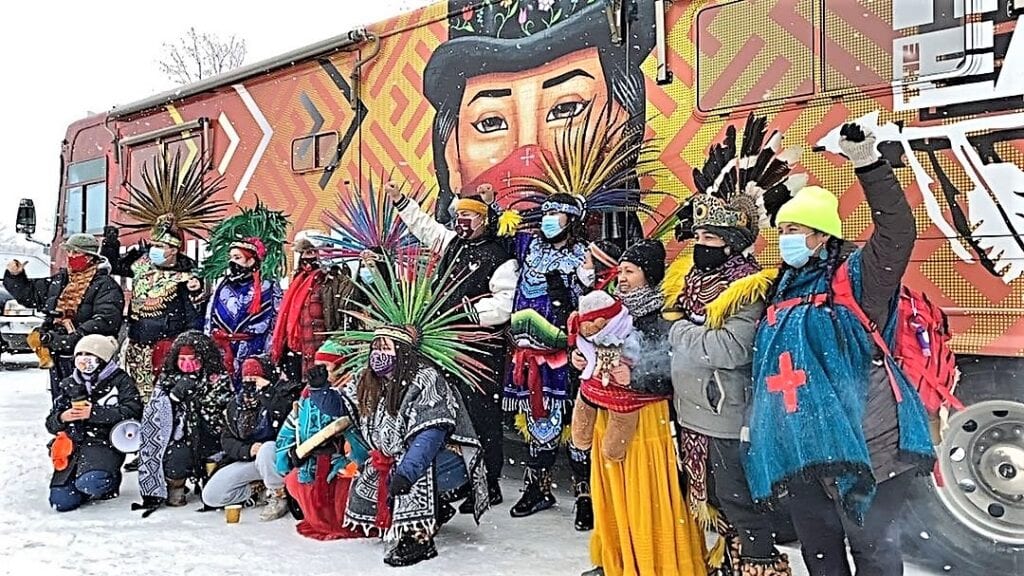 Pipeline resistance unites Indigenous peoples from across Turtle Island, as illustrated by this gathering in Backus, Minn, near the Enbridge Line 3 construction route.
COURTESY / By Keri Pickett

WASHINGTON, D.C. – The “Zombie Pipeline,” as Native and allied opponents call the Keystone XL, almost rose from the dead for the umpteenth time on Feb. 5, when Montana Republican U.S. Sen. Steve Daines’ made a bid to restore its construction permit during voting on the federal budget resolution bill.

Vice President Kamala Harris broke a 50-50 tie in the Senate, only very narrowly passing the legislation to the House of Representatives for approval of Schumer’s amended version and clearing the way for Congress to act on a pandemic relief package.

The event references a youth relay from the same points of origin to Washington, D.C. more than four years ago at the outset of the DAPL resistance that drew tens of thousands of backers worldwide.

“President Joe Biden wants to be seen as a climate president, but he cannot claim that title until he stops this pipeline and others like it, like Line 3,” the youth council declared, adding, “We ask the world to join us as we run again.

“Record yourself running, wherever you are, in solidarity, and make as much noise as you can on social media to end this injustice and put pressure on President Biden to stand on the right side of history,” it said.

The Dakota Access Pipeline is operating without a legal federal permit in the wake of a recent court decision in the tribes’ lawsuit reaffirming the need for an environmental impact statement procedure to review the decision that allowed the line to go into operation.

Adding to Native pressure on Biden to staunch DAPL’s flow was a letter from Congress members Nanette Diaz Barragán, Raul Ruiz, Raúl Grijalva and Senators Jeff Merkley and Elizabeth Warren urging Biden to order a shutdown during the environmental review.

“By shutting down this illegal pipeline, you can continue to show your administration values the environment and the rights of Indigenous communities more than the profits of outdated fossil fuel industries,” they said.

“This is a critical step towards righting the wrongs of the past and setting our nation on a path of environmental, climate, and social justice,” they argued in the missive Feb. 5.

“We encourage you to meet with members of the Standing Rock Sioux Tribe and other impacted tribes to better understand how the DAPL affects their lands, treaty rights, and environmental priorities,” they wrote.

The American Civil Liberties Union announced Feb. 2 that it filed a friend-of-the-court brief supporting the lawsuit filed by four Standing Rock business managers for abridgement of access to Highway 1806 at the site of the camps.

In the case Thunderhawk v. County of Morton, North Dakota, plaintiffs assert the constitutional right to speak and assemble along the public road.

The brief emphasizes that courts across the country have long recognized roads as “quintessential traditional public forums,” having served as important sites of protest at key points in American history, “from the civil rights marches and anti-war demonstrations of the 1960s and 70s to more recent protests, including marches in opposition to abortion, in support of rural healthcare, and against police brutality.”

On Feb. 3, Minnesota Democratic Rep. Ilhan Omar, who visited Line 3 in the Anishinaabe treaty lands of where water protectors are being arrested regularly for civil disobedience, wrote to Biden mentioning the project’s unresolved disproportionate impacts on indigenous communities, Enbridge’s “abysmal” safety and spill history, and the disturbances of building a pipeline of this scale in seasonal wetlands.

“Under even the best-case scenarios for climate change, we cannot afford to build more fossil fuel infrastructure,” she warned, adding, “That is especially true for projects like Line 3, which are designed for the dirtiest and most carbon-intensive fossil fuel there is, tar-sands crude-oil.”

On Feb. 2, a Minnesota appeals court denied the Red Lake Band of Chippewa Indians and White Earth Band of Ojibwe their request for an injunction to stop the construction.

“The Red Lake Nation is very disappointed that the Minnesota Courts place more weight on the employment of out of town pipeline workers than it does the irreparable harm that construction causes to our water, wild rice, and forests,” said Joe Plumer, attorney for Red Lake Nation.

“It’s disappointing,” added Frank Bibeau, attorney for the White Earth reservation. “We will endeavor to persevere.”

“The climate and fossil-fuel directives coming quickly from the new president – plus the rapidly increasing investment in and growth of renewable energy – make it clear the era of carbon-loaded oil pipelines is coming to a close,” said Winona LaDuke, executive director and co-founder of Honor the Earth.

White Earth and Red Lake Nations, along with the Sierra Club and Honor the Earth, also filed a complaint in U.S. District Court in Washington, D.C., to overturn a permit that the U.S. Army Corps of Engineers issued in November that allows Enbridge to discharge dredged and fill material into rivers and streams.

MN350 Midwest Tar Sands Coordinator Andy Pearson said these groups “deserve their day to be heard. It’s time for President Biden to stop Line 3 like he stopped Keystone XL,” he said. Any further delay in stopping construction means irreversible harm to more treaty territory and more pieces of pipe in the ground that are fundamentally incompatible with the Paris Climate Accord.”