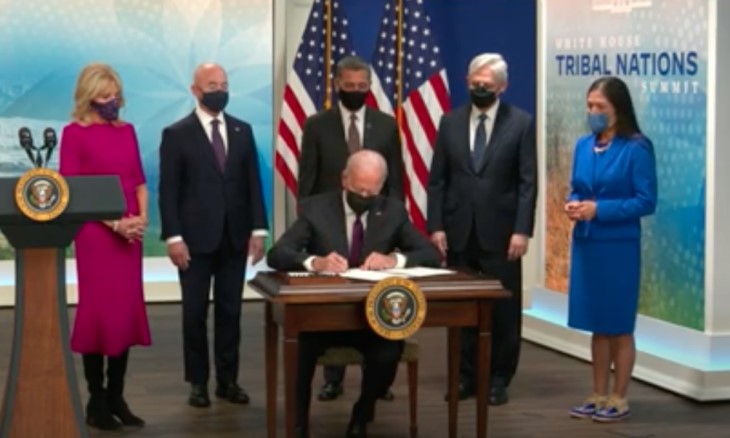 WASHINGTON — The U.S. Departments of the Interior, Agriculture, Education and Health and Human Services today announced that the annual Native Languages Summit will be held on Oct. 4 in Oklahoma City. The Speaking Sovereignty Summit – which will be hosted this year by the Bureau of Indian Education – supports Indigenous communities seeking to protect, revitalize and reclaim Indigenous languages, many of which were erased or critically endangered through assimilationist policies, including federal Indian boarding schools.

“The cornerstone of any culture or community is its language – is how oral histories are passed down, knowledge is shared, and bonds are formed. As part of our commitment to strengthening and supporting Indigenous communities, the Biden-Harris administration is resolute in its efforts to ensuring Native languages are preserved and protected,” said Secretary of the Interior Deb Haaland. “The Department is proud to help lead this interagency effort to encourage programs and projects to include instruction in and use of Native languages.”

Last year, as part of the 2021 White House Tribal Nations Summit, the Departments launched a new interagency initiative to preserve, protect and promote the rights and freedom of Native Americans to use, practice, and develop Native languages – including in signing a memorandum of agreement (MOA) to further the Native American Languages Act of 1990.

Topics to be discussed at the Native Language Summit include mentoring and developing teachers, amplifying family and community engagement, and honoring Native people for their contribution to Native languages within Indigenous communities. The summit will include a space to collectively share best practices and learned experiences from Native language revitalization in Native communities.

The Summit may be attended in-person or virtually and is free to the public. Visit the Native Language Summit website for more information. Members of the public can register for the free event.