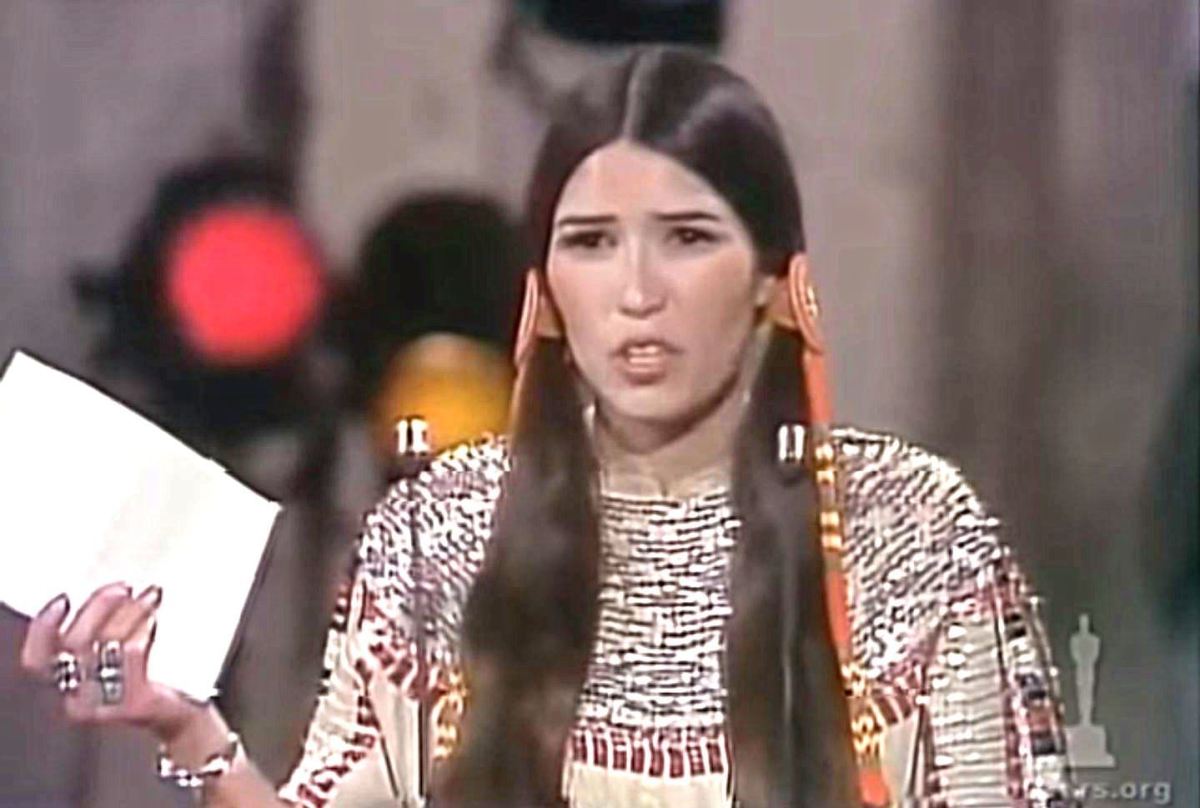 Sacheen Littlefeather in 1973 when she took the stage on behalf of Marlon Brando, to decline his Academy Award for Best Actor.

LOS ANGELES—Almost fifty years after Sacheen Littlefeather took the stage on behalf of Marlon Brando, to decline his Academy Award for Best Actor, the Academy of Motion Picture Arts and Sciences officially issued an apology to Little Feather last June, for the acrimonious reception her appearance received in 1973. On Saturday, September 17, Littlefeather formally accepted the Academy’s apology in a program entitled, “An Evening with Sacheen Littlefeather.”

Although backstage accounts are disputed, Littlefeather received a surprising number of televised boos given the large number of social progressives in attendance. One disputed account has six security guards holding back John Wayne as Littlefeather exited the stage.

On that night in 1973, Littlefeather said: “Hello. My name is Sacheen Littlefeather. I’m Apache and I am president of the National Native American Affirmative Image Committee. I’m representing Marlon Brando this evening, and he has asked me to tell you in a very long speech which I cannot share with you presently, because of time, but I will be glad to share with the press afterwards, that he very regretfully cannot accept this very generous award. And the reasons for this being are the treatment of American Indians today by the film industry – excuse me… [boos and cheers] and on television in movie re-runs, and also with recent happenings at Wounded Knee. I beg at this time that I have not intruded upon this evening, and that we will in the future, our hearts and our understandings will meet with love and generosity. Thank you on behalf of Marlon Brando. [applause]”[53]

Littlefeather was born Marie Louise Cruz in 1946 at Salinas, California. Her mother, Geroldine Barnitz, was white, and her father, Manuel Ybarra Cruz, was allegedly of White Mountain Apache and Yaqui descent, although no accounts were found indicating he was enrolled at any tribal agency, or that Littlefeather was an enrolled tribal member. During the years that Littlefeather was a young activist, many Native American groups were protesting across the country, especially at Alcatraz Island, and it was common for them to eschew their birth names in favor of names which sounded more authentically Indian. How many of these activists were actually enrolled tribal members has never been comprehensively investigated,

Littlefeather was not raised in the Native American community, but by her white maternal grandparents, to escape an abusive father. After high school, Littlefeather took a portfolio to the Bay Area hoping to find work as a model. She attended Hartnell Junior College studying elementary education as well as dramatics and speech. It was as this time she adopted her Indian identity, joining the United Bay Indian Council, and participated in protests, including the occupation of Alcatraz Island in 1970. Littlefeather said she chose her new name because of a feather she always wore and because of a nickname her father had for her.

Later Littlefeather went to Los Angeles hoping to become an actor .More than one version exists of how Littlefeather met Marlon Brando. The most common account is that Littlefeather met Francis Ford Coppola, the director of the Godfather movie for which Brando received his Best Actor award. Coppola introduced her to Brando and said Littlefeather was “an Indian princess.”

After her Academy Award speech, Playboy ran previously taken photos of Littlefeather. She explained that she was “young and dumb” and that is was “strictly a business arrangement.”

As the years went by, Littlefeather’s aspirations to be an actor and model had modest success. She said she was black listed for her Academy Awards speech, and she was pleased with the Academy’s apology, but said it only took fifty years.