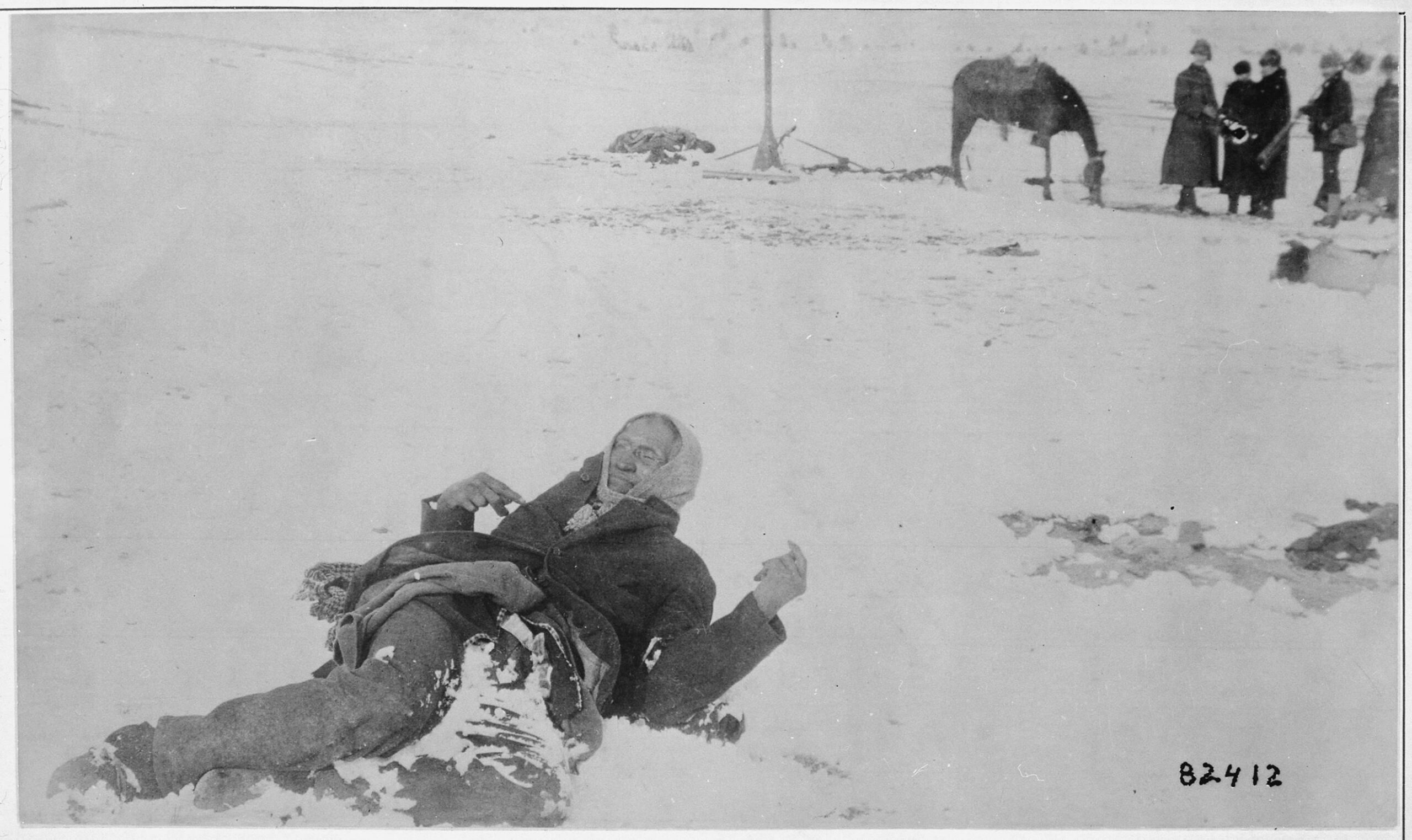 No more iconic and disturbing photo of Wounded Knee exists than this tragic death photo of Chief Big Foot.

WOUNDED KNEE—A recent resolution from the Oglala Sioux Tribe (OST) announced that the tribe had entered into a “real estate purchase and sales agreement for the Czywczynski property at Wounded Knee.” According to the resolution, the property owner, Jeannette J. Czywczynski, “has indicated her willingness to sell the land” for $500,000. However, neither tribal officials nor Czywczynski had a comment for the NSNT, and she has as yet to receive this payment, and so contrary to the AP news story, the sale is not yet official.

The resolution goes on to state that “the land at Wounded Knee shall be held and maintained as a memorial and sacred site without commercial development.”

This does not preclude other developments not motivated by profit.

Over the years, the property at Wounded Knee, given its proximity to the mass grave site from the December 29, 1890, massacre of over three hundred Lakota by the US Seventh Cavalry, has been the subject of much controversy. The American Indian Movement (AIM) seized the property in 1973, and burned the trading post to the ground.

For ten years Mario Gonzalez, an enrolled member of OST, was the pro bono attorney for the Wounded Knee Survivors Association (WKSA). The goal was two-fold: get an apology from the government for the massacre, and build a national memorial at the massacre site. With the help of the late Alan Parker and Suzan Harjo, Gonzalez got South Dakota Senator Tom Daschle to introduce a resolution to Congress in 1990, Gonzalez: “The resolution expressed the government’s ‘deep regret’ for the 1890 massacre. I had originally included the words ‘expresses its sincere apology and deep regret’…but for some reason Senator Daschle omitted ‘sincere apology’ in the final draft.”

Gonzalez said the WKSA was not happy with that final language and are still waiting for an official apology. Gonzalez also drafted a bill introduced by Daschle and Senator Larry Pressler, that would fund a cultural center and museum complex at the site, but Gonzalez said the bill was never enacted “partly because of local opposition to the bill.”

Owner Jim Czywczynski wanted over $3 million for the Wounded Knee property near the grave site, and attempts were made by journalist Tim Giago, who spent his childhood at Wounded Knee, and whose father worked at the trading post back in the 1930’s, to raise money to purchase the Czywczynski property and open a museum and memorial. Giago was unable to raise this money or get broad based support for his development plans. Later, Czywczynski’s widow, Jeannette, was willing to settle for the half million.

At present, the grave site receives limited traffic as there are no amenities, no visitor’s center. Bus tours arrive, and panhandlers swoop in, many popping open the trunks of their cars and setting up shop. Attempts by tribal law enforcement to restrict or contain this panhandling have proven futile.

There is perhaps no place name that viscerally conjures up the imagery of the tragic Lakota past than Wounded Knee. Once called a battle in school history books, it is now correctly identified as a massacre. Soldiers did die, the Lakota did fight back as much as they could, given they had few weapons and were surrounded on all sides by nine troops of US Cavalry and thirty mounted Indian scouts, all backed by four Hotchkiss cannon on top a nearby rise, but the Lakota lost ten times as many, including women and children.

The haunting photographs of their dead bodies frozen in grotesque positions on the bloody snow does not speak to war, but to slaughter, not that slaughter was something many of the Wasicu locals would have balked at, given the two editorials written by Aberdeen Saturday Pioneer editor, L. Frank Baum, who would go on to write the Wizard of Oz children’s books. These editorials sum up a pervasive attitude of the white settlers who had occupied the former treaty established territory of the Great Sioux Nation, and are more horrific than even the photographs of the frozen dead. This one from January 3, 1891:

“The Pioneer has before declared that our only safety depends upon the total extirmination [sic] of the Indians. Having wronged them for centuries we had better, in order to protect our civilization, follow it up by one more wrong and wipe these untamed and untamable creatures from the face of the earth. In this lies future safety for our settlers and the soldiers who are under incompetent commands. Otherwise, we may expect future years to be as full of trouble with the redskins as those have been in the past.”

From these editorials we see the chilling way a seemingly civilized mind can twist logic and reason to serve almost any objective—in this case the extermination of an entire tribe of Indians, advocating an action diametric to the very civilized reality Baum was writing to protect from the savagery of Indians.

The sensitive nature of the massacre has deepened in recent years, and any attempt to make any structural changes to the nearby property is condemned and resisted by many tribal activist groups. Whether a joint tribal venture can succeed in establishing a developed presence that is not as bad an affront to the sacred dignity of the grave site as the panhandlers are, remains to be realized. This is, however, the first time an organized tribal backed venture has been approved by tribal resolution and that the funds have been promised to pay for the purchase.