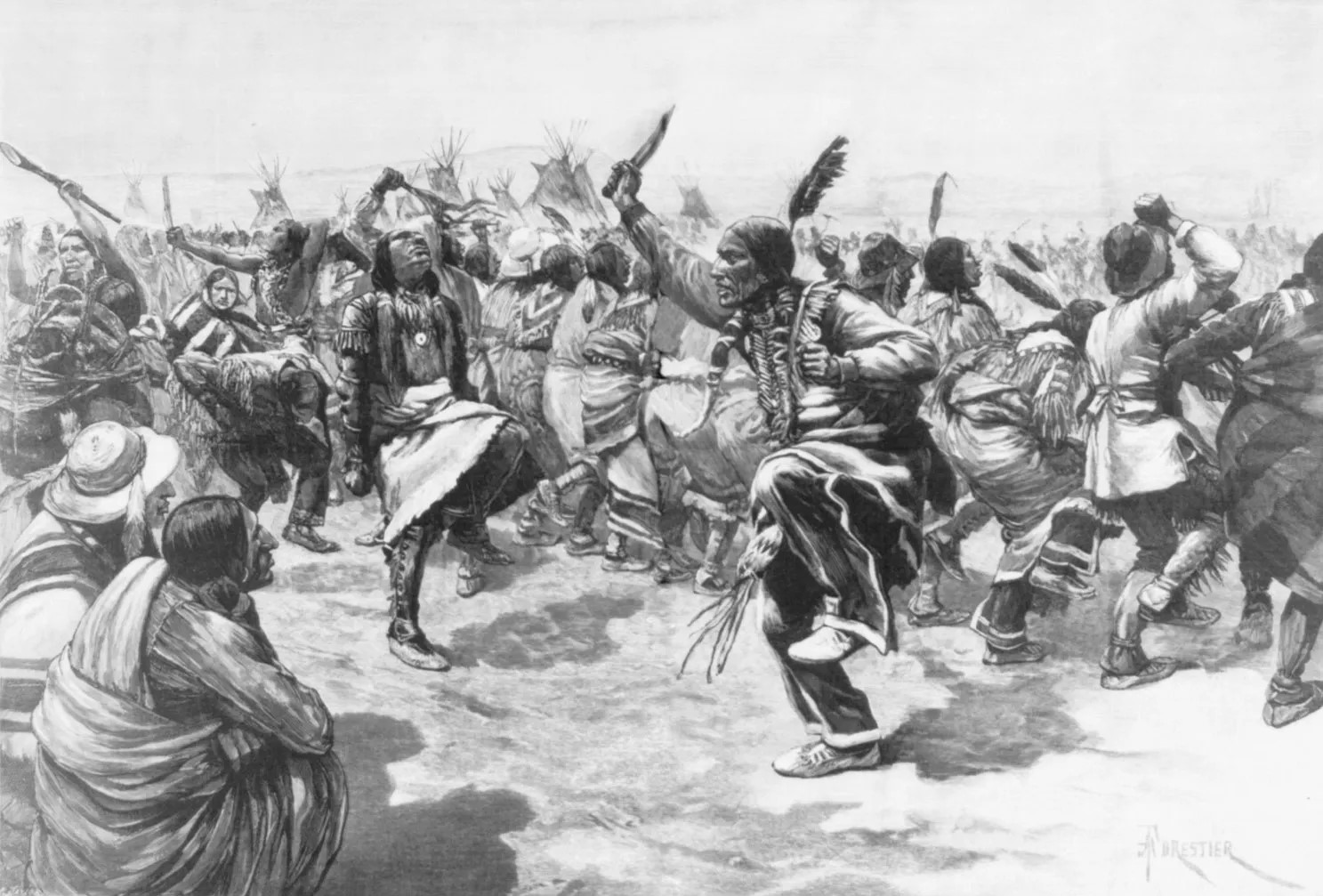 Ghost Dance of the Sioux, print from a wood engraving, 1891. Library of Congress, Washington, D.C

WOUNDED KNEE – For more than a century, there have been misconceptions about the identity of the victims of the 1890 Wounded Knee massacre.

Because the site is within the boundaries of the Oglala Lakota Nation (Pine Ridge Indian Reservation) many people mistakenly believe it was the Oglala Lakota who were the victims of the Wounded Knee Massacre. However, this is not the case.

A close examination of the historical facts leading up to the massacre at Čhaŋkpé Ópi Wakpála (Wounded Knee Creek) in December of 1890, will reveal without question the identity of those who are buried in the mass grave known as the Wounded Knee Memorial site, as Hunkpapa and Mnicoujou Lakota from the Standing Rock and Cheyenne River Indian reservations.

Throughout the later part of the 1800’s the Federal Government at the behest of white settlers and their insatiable lust for Indian land and minerals led to a series of federal policies that would not only steal the aboriginal homelands of the Tetonwan Lakota, but would also decimate their food source, the Tatanka (Buffalo).

By 1889 most of the Tetonwan Lakota Itancun (Chiefs) had surrendered and were confined to life in concentration camps (reservations) where Indian Agents were assigned to watch over them to ensure they did not escape. They were forced to live off government food rations as a means of their survival.

Among those forced to live within the boundaries was Itancun Tatanka Iyotake (Chief Sitting Bull), the principal chief of the Tetonwan Lakota who throughout his lifetime defied the US Government and was the Wicasha Wakan whose vision foresaw the defeat of General George Armstrong Custer and the Seventh Cavalry at the Battle of the Greasy Grass.

On July 20, 1881 Tatanka Iyotake, after having fled to Canada due to the aftermath of the Battle of Greasy Grass, returned to the U.S. and surrendered at Fort Buford near the Standing Rock Reservation.

“I wish it to be remembered that I was the last man of my tribe to surrender my rifle,” Sitting Bull told the officers at Fort Buford when he turned himself in.

For two years, Sitting Bull and his followers were confined to a prison camp at Fort Randall before finally being allowed to return to the Standing Rock Reservation in 1883.

Tatanka Iyotake spent parts of 1884 and 1885 touring with Buffalo Bills Wild West Show. After spending time in the Wasicu world, the old chief realized the Wasicu were as many as the grasshoppers, and resigned to life on the reservation.

Then in 1889, after the government had cut the budget for annual rations and a severe drought had decimated crops across the northern plains, the Lakota were on the brink of starvation. Because of malnutrition, the children were dying of diseases including tuberculosis and were being hauled away to boarding schools. The people were expected to assimilate to a new way of life by wearing the white man’s dress, speak a foreign language and practice an unfamiliar religion. Their old way of life was disappearing and the people’s hearts were on the ground.

Then in 1889 an Oglala Lakota man named Kicking Bear brought word to the Hunkpapa about the Ghost Dance. In Stanley Vestal’s book titled, “Sitting Bull Champion of the Sioux” Vestal writes, “It taught that the Messiah had returned to earth – this time in the flesh of an Indian, since the whites had denied and killed him; that the Messiah was coming from the West with all the nations of the Indian dead, with buffalo and horses: that He would remove the white men by supernatural means and that all the Indians, dead and living would be reunited upon a regenerated earth. All that was required to bring about this millennium was dance the Ghost Dance regularly until He came – only a few moons.”

Vestal writes that while many others in Sitting Bulls camp became followers of this new hybrid Christian religion, Sitting Bull was not convinced.

However, in December of 1889, Vestal writes that Sitting Bull received an invitation from Short Bull, the leader of the Oglala Ghost Dancers, who had a revelation that “the Messiah was to hasten his coming, because the wasicu were interfering too much.” Short Bull believed that Sitting Bull as chief “ought to be on hand to greet the Indian Christ.”

Sitting Bull said he would request a pass to travel to meet with the Oglala Ghost Dancers who were held up at Stronghold Table in the Badlands.

James McLaughlin the Indian agent at Standing Rock was informed by Lt. Bull Head that the chief was preparing to travel to the meet with the Oglala Ghost Dancers. McLaughlin and other U.S. officials fearing that the Ghost Dance was a pre-war dance, ordered Tatanka Iyotake’s arrest at his camp along the Grand River.

At 6 a.m. on December 15, 1890 one of the most influential chiefs in American history, was killed during a scuffle that erupted during the attempt to arrest him.

Fearing for their safety many members of his family fled south. The Hunkpapa Ghost Dancers sought refuge with Hehaka Gleska (Spotted Elk) a close relative of Sitting Bull and other Mnicoujou Lakota near the community of Cherry Creek, who had also embraced this newfound religion.

According to many oral accounts, the Hehaka Gleska also known as Si Tanka (Big Foot) and his followers then traveled South to join the Oglala Ghost Dancers, who had invited Sitting Bull to witness the return of the Messiah, and who were held up at Stronghold Table in the Badlands. But they would never make it as they were intercepted by Major Samuel Whitside and his battalion of the Seventh Cavalry Regiment. They were escorted five miles westward to Čhaŋkpé Ópi Wakpála (Wounded Knee Creek).

Shortly afterward Colonel James W. Forsyth arrived to take command. According to Forsythe’s diary he along with the Seventh Cavalry Regiment had been camped at Red Cloud’s Agency for two weeks awaiting word of movement of the Ghost Dancers.

On December 29, 1890 more than 350 Mnicoujou and Hunkpapa Lakota were surrounded by the 7th Cavalry who had placed four Hotchkiss guns in position around the camp.

After ordering the disarming of Hehaka Gleska’s band, a scuffle broke out between a man called Black Fox and some soldiers and a rifle was discharged. After the ensuing fight the soldiers began firing the Hotchkiss guns at the mostly unarmed men, women and children.

More than 300 Hunkpapa and Mnicoujou Lakota would be massacred that day in what has become known as one of the worst crimes in history committed against the innocent, who only wished to dance their way to a better life for themselves and their children.