A Lakota tipi stood as the main focal point at the 19th Annual Indian Education Summit. (Photo by Estella Claymore)

RAPID CITY– Okolakicize! Okolakiciyapi! “Working together as one, for the betterment of all!” This was the theme for this year’s 19th annual South Dakota Indian Education Summit held September 8-9, 2022. This year, the summit offered a special Youth Day on Saturday, September 10, for students from kindergarten to 12th grade.

“The education, health and well-being of our youth requires us to take a cooperative approach from every facet of our communities,” said Fred Osborn, Director of the South Dakota Office of Indian Education in the summit welcome letter. “Developing academic achievement, as well as developing mental, social, and spiritual growth, is a foundation of the summit’s seminars.” 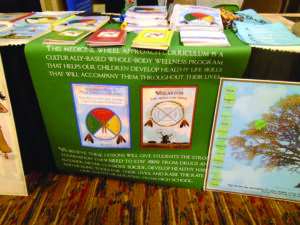 An increased focus on the Oceti Sakowin Essential Understandings was also highlighted at this year’s in person summit held at the Best Western Ramkota Hotel and Convention Center in Rapid City.

“The Summit has changed locations, anywhere from Pierre, Chamberlain, or Rapid City.,” Osborne said. “The past two years, this has been online, so this is a very exciting Summit to finally have in person,”

The South Dakota Office of Indian Education hosts the Indian Education Summit for educators and students to develop their understandings and experiences every year. The summit offers an opportunity for educators to learn about different initiatives, strategies and networks that are available to assist them in incorporating South Dakota Indian history within their classrooms, schools, and communities.

Attendees at this year’s summit represent all nine tribes in the State of South Dakota. Each presentation is focused on American Indian education and perspectives for educators to use in their classrooms and schools.

“After hosting virtual summits due to the pandemic, it was the vision of the Office of Indian Education to bring educators from across the state together in person to learn about advancements and resources that support Native education,” Osborne said. “This year’s summit involves a Youth Day on Saturday, September 10th that is free to all youth. It will be an opportunity for youth to learn and play traditional games with Crow Creek Chairman Peter Lengkeek, learn Lakota Star Knowledge with S.T.E.A.M Team with Oglala Sioux Tribe Child Care and Development.  High school youth can learn about the ASVAB.  All youth will be able to meet Mark Mindt, author of KODA the Warrior comic books.”

The summit was open to the general public. This year, educators were especially invited and encouraged to come to the event. There were 25 different break-out sessions that offered a diversity of topics and speakers.

Dr. Darryl Tonemah (Kiowa/Comanche/Tuscarora) has a Ph.D., in Counseling Psychology and Cultural Studies, a master’s degree in Community Counseling and three Bachelors of Science Degrees.

He has sat on numerous state and national boards addressing disparities in education and healthcare among the American Indian community. He has done extensive work training hospitals, clinics, universities, corporations and schools in the United States and Canada on trauma and its relationship to behavior and health.

He is the owner of the Tonemah Consulting Group, an organization dedicated to increasing wellness in communities and increasing capacity in healthcare systems. He also owns First Nations Telehealth Solutions, a company dedicated to increasing access to psychological and psychiatric and health care via telemedicine, and is the president of The Native Legacy Foundation, a non-profit organization dedicated to empowerment programming and suicide prevention in American Indian communities. He has recorded 11 award-winning CD’s, published research, a book entitled “Spray Your Swamp Cooler,” and is working on his next book about addressing trauma called “Personal Sovereignty.” Tonemah has appeared in numerous films, television shows, and stage productions. This year, his keynote speech was called “Trauma: From Dealing to Healing.”

“Trauma is pervasive in our Native communities,” Tonemah said. “It presents itself in a host of ways from anxiety and depression to ADHD, to addictions. This conversation will discuss trauma from biology to sociology and how we can use simple tools to regain our personal sovereignty and claim or reclaim victory.”

Raymond Daw, MA, was the first keynote speaker to present at the summit this year. Daw is a member of the Navajo Nation and is bilingual in Navajo and English. He is a trainer and web designer for the Takini Institute on the historical trauma intervention model, and he formerly worked as the Administrator of Behavioral Health at the Yukon-Kuskokwim Healthcare Corporation in Bethel, Alaska.

During his tenure as Executive Director of Na’nizhoozhi Center, Inc. (NCI), Daw participated in research with the National Institute for Drug Abuse (NIDA) Clinical Trials Network through the University of New Mexico. NCI was recognized as a model and innovative program for American Indian and Alaska Native substance abuse treatment.

Daw’s presentation was called “Cultural Elements of Native Mental Health with a Focus on Rural Issues.”

To begin and end this year’s summit, the drum group called “Stampede” was called upon to send participants off in a good way.

Lead singer for the drum group, Jeremiah Moreno, wrote a letter about the history of the group and what its mission is:

“Hau Mitakuyepi, Greetings friends and relatives. My name is Jeremiah Moreno and I am the lead singer for the drum group known as ‘Stampede.’ In 2004 I moved to Cheyenne Creek, SD, to break free of a negative environment. My mother helped guide me to a more fulfilling path by helping me choose to live with my leksi, Wilmer “Stampede” Mesteth. He gave me an incredible opportunity by showing me and sharing his vast knowledge and wisdom through the Lakota perspective. My ciye, Juan Mesteth, started the group Stampede in 2010 and traveled across Indian Country representing our mentor, (his father) by naming the group after Leksi Wilmer ‘Stampede.’ Ciye, Juan always sang the appropriate songs and always demonstrated the proper protocol process representing our Tiyospaye in the best possible way. Since Leksi’s passing in 2015 we have carried on his knowledge and wisdom by bringing the next generation into the circle respectfully and appropriately. Ciye Juan has also recently joined Leksi and made his journey to the spirit world.

“I have made a commitment to our relatives that I will carry on his drum name for the next generation. Through each other’s help and strong support, and when the Wakanyeja are ready to start singing, they will have a drum of their own.”