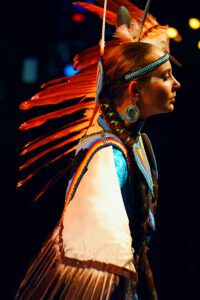 The performance that will celebrate the pageantry and unique messaging of Native American storytelling through dance and music. Tickets are now on sale at www.bruleinbrookings.com.

For 27 years, Brulé has brought the sights, sounds and stories of the Native American rock opera concept initiated by founder and troupe leader, Paul LaRoche. The group is best known for thrilling audiences with a merger of cultural rock and theatrical instrumentations but with the emotional impact of their American Indian culture.

“When SDSU President Barry Dunn suggested that Brulé be invited as an element of the celebration of the American Indian Student Center, we were absolutely thrilled,” said Lynn Von Eschen, director of the Oscar Larson Performing Arts Center. “Their full-scale theatrical performance concert is going to showcase the spectacular dancing, musical elements from Native American traditions, and we feel the theatre will be simply electric.”

Brulé’s show consists of a five-piece rock ensemble, augmented with an array of traditional Native American instrumentation. Paired with the stunning steps of one of the top Native American dance troupes, their authenticity brings a multidimensional art form to this cultural rock opera. The musical journey of LaRoche adds an affecting story to audiences and has been well-documented in the bestselling biography, “Hidden Heritage.”