Canada compensates boarding school victims in the amount of $40 billion 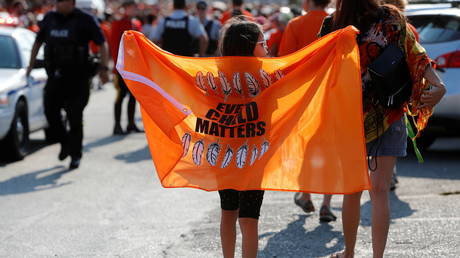 The Canadian government agreed to provide compensation in the amount of $40 billion ($31 billion in U.S. dollars) for the children taken from indigenous families after First Nations Child and Family Caring Society (FNCFCS) and the Assembly of First Nations (AFN) filed a human rights complaint against Canada, fifteen years ago.
Of that amount, only half ($20 billion) goes to the people who were most harmed. The other half ($20 billion) goes to reforming the systems that created harm. A system were indigenous children are over-represented in the foster care system in Canada.
In the 15 years since the action was filed, the Human Rights Tribunal in Canada found that child and family services discriminated against indigenous children through under-funding so that children were removed from their families and home communities.
In 2007, FNCFCS and AFN alleged that child welfare services provided to indigenous children were flawed, inequitable and discriminatory and ordered that Canada provide remedies. Early on, the Canadian government asked that the case be dismissed.
In 2014, the Human Rights Tribunal began hearing evidence, then in early 2015, the Human Rights Tribunal ruled.
The decision made was in favor of FNCFCS and AFN and that indigenous children were being discriminated against.
What helped the case against the government were statements made by the Canadian Human Rights Commission, the Chiefs of Ontario, Amnesty International and Canada’s department of Aboriginal Affairs and Northern Development Canada. The statements made summarized the past and current state of child services available to indigenous children in Canada; more importantly, they covered national and international law relevant to First Nations child welfare.
Their statements included suggested remedies since it was determined by the Human Rights Tribunal that discrimination against indigenous children had taken place.
The amount of the compensation is a record itself and includes $2,500 (in Canadian money) for preventative care per child for services and for support beyond age 18 for foster children.
All of this comes after the horrific news in 2021 of the high number of deaths in residential schools operated by the government and churches in Canada, deaths among indigenous children in Canada.
What it does is focus international attention on Canada’s extraordinary neglect of its most vulnerable population: indigenous children.
The compensation of $40 billion (in Canadian dollars) does not let the government or the churches, including the Catholic Church, off the hook for the historic damages done through the residential school system.
The pressure must continue so that those responsible for the harm created through the residential school system come forward, apologize and provide monetary restitution.