WASHINGTON —Water rights have been a major concern for tribal nations this past decade, and last Friday Interior Secretary Deb Haaland signature finalized a here-to-fore complicated and highly contentious agreement between the Confederated Salish and Kootenai tribes (CSKT), the state of Montana, and the federal government.

The problem was reconciling two different and conflicting doctrines: historic tribal water rights, and Montana’s state water rights. The CSKT dropped legal claims to thousands of off-reservation water rights, and in return received $1.9 billion, partly to shore up the Flathead Indian Irrigation Project. In addition, the 18,800-acre National Bison Refuge was returned to the management of the CSKT, after being taken by Congressional Act in 1908.

In both cases, the Flathead Irrigation Project, and the creation of the National Bison Refuge, the Dawes Act of 1877 was used as rationale for opening land within the reservation border for white use, ownership, and occupation. According to the Bureau of Reclamation, a 1904 Act of Congress “supplied the foundation” for the irrigation project through the “distribution and irrigation of Indian allotments, and the sale of all ‘surplus’ lands.” Four years later, a subsequent Act “authorized $50,000 for the survey, plans, cost estimates, and construction of irrigation systems on all lands of the reservation.” 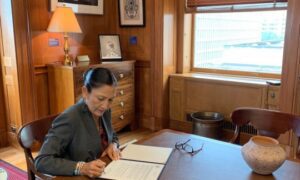 At this time, more land within the reservation border was seized, ostensibly to manage what was then the largest free-roaming bison herd in the world, a herd created by the tribe, but a herd that could not be allowed to continue to occupy the range then available if that range were to be converted from tribal trust land into land available for white settlement. A 2021 article from Progressive Magazine interprets the seizure from a nonbureaucratic perspective: “By the late 1800s, the herd on the Confederated Salish and Kootenai reservation had grown into one of the world’s largest free-roaming bison herd. But the property was seized from the tribes by the federal government through a devious policy of allotment that was commonplace at the time, under the Dawes Act of 1887. It allowed the federal government to divide land between tribal members and sell off the surplus to homesteaders.”

In opposition to the agreement that Interior Secretary Haaland signed, are nontribal Montana water rights activists, whose rhetoric is deeply steeped in right wing narratives unrelated to the agreement specifics. This from the Western Montana Water Rights webpage: “Is it a coincidence that the extreme push for the Daines Compact occurs at the same time that Black Lives Matter (BLM) and all form of leftist radical thugs are destroying our cities, statues, monuments, federal buildings, businesses, liberty and freedoms?”

After extensive research, the NSNT could find no cases where “leftist radical thugs” had destroyed any cities, statues, monuments, federal buildings, or businesses or threatened liberty or freedom in the state of Montana. There was the case of Timothy McVeigh, who blew up the Alfred P. Murrah Federal Building in 1995, killing 168, including 19 children, and injuring 680 others, but that was in Oklahoma, and McVeigh was a rightwing radical, although no accusations or confirmations he was a thug could be found.

The conflict between the CSKT and the state of Montana had been flying under the national radar for some years. Starting in 2015 Montana Senators Steve Daines, a Republican, and Jon Testor, a Democrat, sponsored bipartisan legislation to find a solution to this conflict both sides could accept. This was the Daines Compact.

Just before he left office, President Trump signed the Montana Water Rights Protection Act into law. He did so reluctantly, because the pact was buried deep in a $2.3 trillion dollar bill that also included $900 billion in COVID relief.

A statement signed by ten prominent GOP legislators from the state of Montana, who fear tribal control of water rights will hurt nontribal farmers relying on irrigation, accused Daines of last-minute deception, that he slipped the CSKT pact into a 5,600-page spending bill, intentionally leaving Congress little time to properly consider it, or the opposition little time to combat it. The legislators criticized Daines for reaching across the aisle and working with Testor, but had no criticism of incoming GOP Governor Greg Gianforte, even though he voted for the CSKT pact and gave it his whole-hearted support.

Katie Schoettler, spokesperson for Senator Daines, said that Daines had been “transparent with all Montana voters, who overwhelmingly re-elected him, about this bill.”

Gianforte explained the dilemma he thought Montana faced, and why the CSKT pact was necessary: “If an agreement had not been reached, 72 percent of the water-rights holders in the state of Montana would find themselves in court, defending their underlying water rights. And the courts historically have held that without an agreement, the prior rights of the tribes supersede.”

In all of this, the underlying injustice of converting tribal trust land into surplus land for the purpose of white settlement and use was addressed by neither side of the aisle but was addressed by tribal member Rich Janssen, head of CSKT’s Natural Resources Department, when referring to tribal control of the National Bison Refuge: “This simply is not an attack on public land. It’s righting a wrong that should never have been done in the first place.”

Tribes were forced into accepting allotments, to create “surplus” land for white settlement, which was foundational in the creation of the Flathead Irrigation Project and the National Bison Refuge. The irrigation project was intended to turn tribal trust land into white owned land under the pretext it was a project for irrigation, and the creation of the bison refuge was necessary so that over 38,000 acres of trust land could become surplus land open for white settlement. Neither side disputes this, but only tribes discuss it.

Despite that dark history, the eyes of CSKT Chairwoman Shelly Fyant are optimistically focused on the future: “This will conclude a very long and difficult effort to quantify the water rights of the Selis, Olispe and Ksanka people. This means we can avoid decades of acrimonious litigation on streams across much of Montana and protect many streams with sufficient amounts of water to ensure fish can survive and Montana’s residents can recreate and fish as they have for generations.”