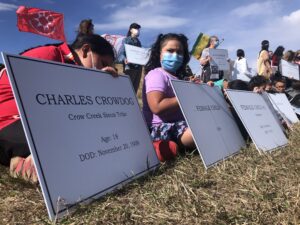 Children sit with placards with the names of children who died at the old Rapid City Indian Boarding School during last year’s ceremony in front of a hillside that researchers determined hold unmarked graves of some of the deceased children. A memorial is planned to honor the children at the site. (Courtesy Photo)

RAPID CITY — In June came the shocking discovery of hundreds of unmarked graves at a former Indian residential school in Canada. Last week a bill was introduced in Congress to set up a Truth and Healing Commission on Indian Boarding School Policies in the United States. Here in Rapid City the new attention given to the forced assimilation boarding school policies of two federal governments only amplifies the need to recognize the plight of area Natives during that era.

“With the recent national and international spotlight shining on this troubling history, we feel even more powerfully drawn to honoring the children who died right here at the Rapid City Indian Boarding School,” said Lafawn Janis who is a member of the committee organizing a memorial walk scheduled for Monday in Rapid City on Indigenous Peoples Day.

The local boarding school operated between 1898 and 1933 and was part of the nationwide federal initiative to crush Indigenous cultures and assimilate Native youth into the Western world. The school, located on the western side of town eventually came to house the Sioux San Hospital which today is the Oyate Health Center.

In recent years, researchers have identified at least 50 children who died at the school. Many of them are buried in unmarked graves on a hill that used to be part of the school grounds and is now property held in federal trust for three area tribes.

To honor the children, marchers will gather Monday, October 11, at 9 a.m. at Sioux Park in Rapid City for welcoming remarks. At 10 a.m. the Remembering the Children walk begins. The walk follows an approximately 1 mile path to the field across the road from the Oyate Health Center and behind West Middle School. At 11 a.m. the marchers gather for prayers for the children. Snacks and soup will be provided. Masks are encouraged and organizers ask attendees to bring their own folding chairs if possible. Transportation from Sioux Park to the hillside prayer area will be provided for elders. 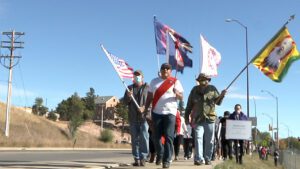 During the walk, community members hold placards with names of the children who perished at the school Sioux San. Many surviving relatives of the children hold the card with their family member’s name. Kibbe Brown has carried the placard honoring her ancestor Adolph Russell in past Memorial Walks. She plans on carrying it again on Monday.

“Adolph was my grandmother’s little brother,” said Brown. “In about 1908 he got a potato from the school’s garden and took it to the boiler room where the kids would go to heat up the vegetables. The students were chronically underfed so they had to do what they could to supplement their diets. He died when the boiler exploded. They had to identify him by his shoes.”

Community members have planned a $2 million memorial to the children to be built on the site that they hope will serve as a national model for how a city and a region can mark a troubling blemish on its history and yet look forward with hope and healing. Plans include a walking path up the hill with boulders displaying the names of the children who died. Ceremonial scaffolds are planned for the top of the hill with a space for feeds and ceremonies down low. Also planned are four inipi purification lodges.

“It’s a very important day to acknowledge the accomplishments of our people,” said John Old Horse, a pastor, veteran and citizen of the Oglala Lakota Nation who led last year’s the march with song and prayer. “And also to remember the things that aren’t so great in our past and heal our community.”

To learn more about the Rapid City Indian Lands Project or to make a donation to the memorial, go to RememberingTheChildren.org.