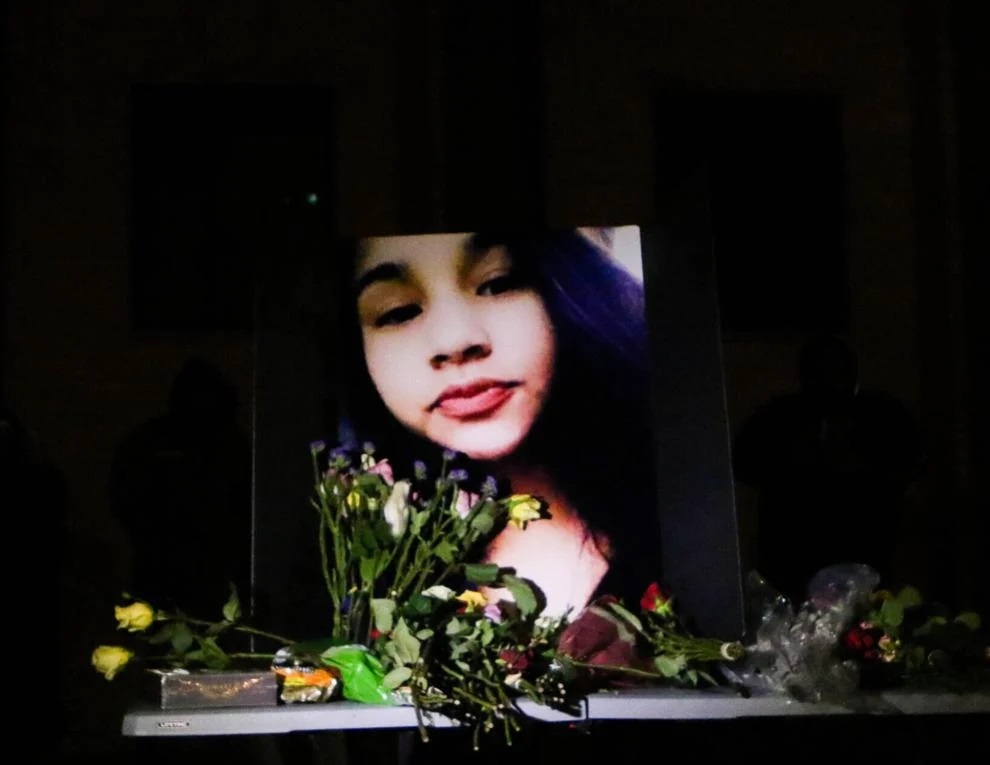 A photo of Abbey Lynn Steele on display during a vigil on Dec. 6, 2022, outside the Pennington County Jail in Rapid City. (Photo by A.J. Etherington/Rapid City Journal)

A group of Native American activists and their supporters have refined their demands for Pennington County officials following the death of a young woman who’d been arrested in Rapid City, and they plan to meet weekly all winter long to push for their demands to be met.

Tuesday will mark four weeks of group meetings, and its leaders say the energy has held.

“We’re continuing to rack up the time, and we’re getting a lot of committed organizers who keep showing up,” said Natalie Stites Means, who helped found the group.

The group wants to see the dismissal of all nonviolent warrants, new protocols for the handling of medically vulnerable inmates and for notifying family members of hospital transfers, as well as implicit bias training for all law enforcement and correctional officers.

All officers trained at the Law Enforcement Academy in Pierre, the state’s only training facility for incoming and certified officers, complete a required course on fair and impartial policing. Correctional officers are not required to attend the academy, however.

Attendees included representatives and leaders from the NDN Collective and Generations Indigenous Ways, as well as two Columbia University researchers and a handful of women who offered stories of their own relatives’ experiences with the Pennington County Jail and Rapid City Police Department.

Organizers told their visitors on the night of the first meeting that they hadn’t expected such a turnout on a night where temperatures hovered near zero degrees Fahrenheit.

“We’re so happy to see so many of you,” said Golnesa AsheghAli, the owner of Racing Magpie in Rapid City. “We thought it might be just us.”

The group’s work was motivated by the death of Abbey Lynn Steele. The 20-year-old mother of two was arrested on warrants Nov. 16, just five days after she’d undergone an emergency cesarean section.

Her heart stopped at the Pennington County Jail within hours of her arrest, but she was resuscitated and then transported to Monument Health in Rapid City without her family’s knowledge. The family removed her from life support on Dec. 2.

Steele was arrested at least four times for missed court appearances and violations of a pre-trial sobriety program in the year and a half leading up to her death. She was facing a felony charge for drug ingestion – a charge unique to South Dakota – based on a drug test that occurred at the hospital where she’d given birth to her firstborn.

Her family said the initial test was taken without her consent. Before the felony charge that followed the test, her criminal history consisted of one traffic violation.

The death certificate for Steele, released in mid-December, says she died from pneumonia and methamphetamine toxicity. The narrative portion of the publicly accessible version of the certificate does not include a complete narrative of the circumstances surrounding her death.

DCI spokesman Tony Mangan said this week that the investigation is ongoing.

The organizers of the Tuesday meetings were among the first to reach out to Steele’s family after her death. The Wotakuye Justice Coalition is an outgrowth of a Lakota women’s group called Wotakuye Mutual Aid, or Meals for Relatives, whose members delivered meals, clothes, masks and medical supplies to vulnerable people during the COVID-19 pandemic and has since responded to other community concerns or calls for help from families in Rapid City.

When word broke of Steele’s death, Stites Means said, the women in the group saw their own friends and relatives reflected in her circumstances.

“Abbey Lynn being so young, we could all identify her as someone who’s struggling and needs help,” Stites Means said.

The introductions and ensuing discussion points addressed in the coalition’s first meeting sometimes included personal stories from attendees about their own or their family members’ experiences with law enforcement. Others offered blessings and statements of support on behalf of themselves or their organizations.

Several people said their decision to come was fueled by outrage.

“I’m holding a lot of grief and holding my heart with everyone, especially the family,” said Heather Wood of Rapid City. “And I’m angry, ready to move on making things better.”

Steele’s family has said that they were not informed of her transfer from the Pennington County Jail, instead learning that she was on life support hours later by contacting Monument Health. Some meeting attendees spoke of similar transfers or alleged failures in communication and other substandard health care behind bars.

One woman from Sturgis spoke of her son losing a toe to frostbite after a stay at the jail and a transfer to another facility. She told the group that her son might be willing to take his story public if it helps to change correctional protocols.

Others talked about being children of the foster care system, about sons and daughters who spent time in juvenile correctional facilities.

Susie Red Feather, an enrolled member of the Rosebud Sioux Tribe, attended over Zoom. She read a statement on behalf of Missing and Murdered Indigenous Women USA. When a woman is “stolen,” the statement read, “there’s a hole left in a community that she once filled with love.”

“We demand answers. We demand justice, while acknowledging that justice will not heal the pain,” Red Feather said. “This should not happen to another precious Lakota person, man or woman or Two Spirit individual … I pray this young woman’s death is not in vain, but hopefully, hopefully serves as a much needed eye opener.”

The demand for the dismissal of nonviolent warrants is the most important for the Native community and public safety, Stites Means said. With well over 5,000 active warrants on file with the Pennington County Sheriff’s Office, she said, there are more than 5,000 people in Rapid City who may hesitate to call or cooperate with law enforcement when they or their family members are in trouble, for fear of arrest.

Steele and some of her family members have been victims of domestic violence, Stites Means said. Like many women, she said, they’ve avoided reporting attacks to avoid potential trips to jail.

“I know a number of women who have been victimized, who have been raped or assaulted, or trafficked, and they do not and cannot go to law enforcement for protection, because they have a warrant that is making them fearful,” Stites Means said.

The warrant issue is one that’s garnered a lot of attention as the group meetings have continued, Stites Means said. Several coalition members are also interested in producing a “know your rights” training for community members that could be presented around the area, she said, and committees have been formed to tackle various aspects of the group’s goals.

Most of the 36 people who attended that first meeting have continued to show up to each of the Tuesday night events, she said.

Warrants could be sticking point

Wholesale warrant dismissal might be a hard sell for law enforcement. Rapid City Mayor Steve Allender, a former RCPD police chief, said he understands concerns about fear of arrest, but doesn’t see wholesale dismissal of nonviolent warrants as wise, or fair to those who’ve paid their fines.

“I get the consideration, but on the other hand, stay out of the system in the first place,” Allender said. “If you get a warrant, be an adult and go take care of it.”

Warrants have been a concern for years for Mark Vargo, who returned to his position as Pennington County State’s Attorney this week after a six-month stint as interim attorney general. Vargo pointed to the county’s warrant resolution program as an example of how to balance accountability with concerns about perceived retribution after reporting crimes.

“We are almost always capable, particularly on nonviolent – even nonviolent felonies – of getting the warrants set aside and setting up a promise to appear so that the case is then in motion, and can be dealt with appropriately,” Vargo said.

The county also has a self turn-in program. Warrants that don’t require a jail stay or court appearance can be resolved by paying $25 per warrant. In 2021, 656 people cleared 885 warrants in Pennington County.

Even so, Vargo and Allender both said there ought to be a forum for discussions on systemic issues and community concerns. Vargo said that one option would be to bring those discussions to the just-created Jurisdictional Cooperation Commission, meant to bring together state and tribal leaders to discuss public safety issues that cross tribal boundaries.

“I think that when people say they have a demand, what they’re saying is, ‘I have an idea and I haven’t been heard,’” Vargo said. “I think we can convince people that they’re actually being heard.”