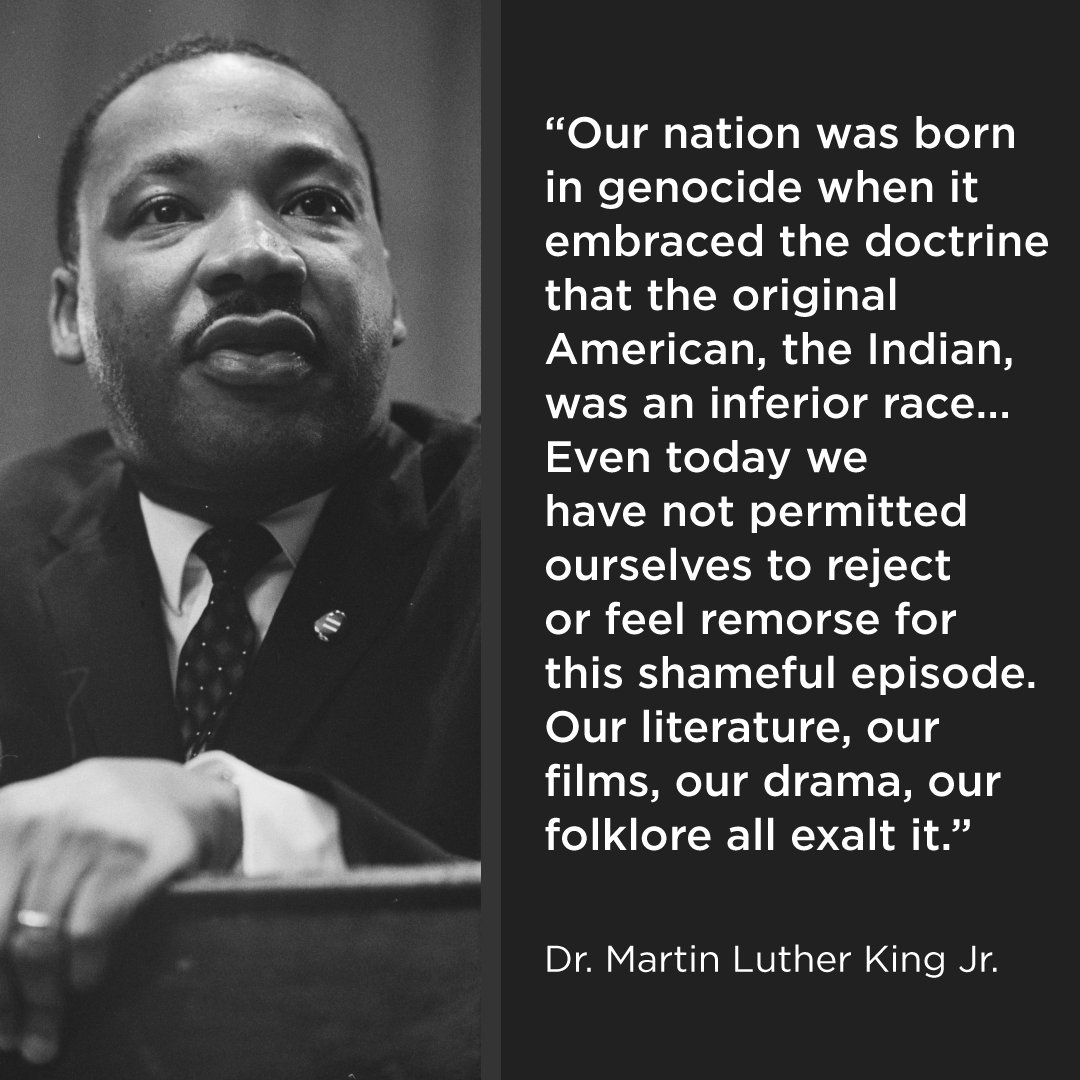 Few students of history are aware that Dr. Marin Luther King Jr., celebrated by a federal holiday on January 16 of this year, was a dedicated and effective activist for Native American rights as well as African American civil rights. He specifically advocated for the desegregation of Native Americans and inspired much of the modern-day movement for Native rights, including water rights and tribal sovereignty.

Drawing from a wide range of teachers — from Jesus Christ and Socrates to Martin Luther and Mahatma Gandhi – Dr. King developed a steadfast belief in using non-violent direct action to fight not only for the liberation of African Americans, but for all oppressed persons. At the 24th Navajo Nation Council in 2020, speaker Seth Damon commended Dr. King, saying “… we honor the life and death of Dr. Martin Luther King Jr. He was not only a champion and leader for Blacks, but Native Americans everywhere…”

For example, John E. Echohawk, a member of the Pawnee Tribe, is an attorney and a leader of the Native American self-determination movement for more than three decades, thanks to the influence of King.

“The principle of tribal sovereignty was one that captured our imaginations, and we saw great potential in enforcing this legal right in the political climate of the 1960s,” Echohawk said. “It was a controversial avenue to pursue because the federal government’s policy relating to Indian tribes at that time was one of terminating our tribes, doing away with our relationship with the federal government and placing us under state jurisdiction—all against our will without our consent.

“Inspired by Dr. King, who was advancing the (African American) civil rights agenda of equality under the laws of this country, we thought that we could also use the laws to advance our Indianship, to live as tribes in our territories governed by our own laws under the principles of tribal sovereignty that had been with us ever since 1831. We believed that we could fight for a policy of self-determination that was consistent with U.S. law and that we could govern our own affairs, define our own ways, and continue to survive in this society.”

In 1970, Echohawk and others did just that by organizing the Native American Rights Fund (NARF), which was modeled after the NAACP’s Legal Defense and Education Fund. For the past 30 years, NARF has served as a political advocate and legal defender of Native American tribal nations in cases pertaining to tribal sovereignty and treaty enforcement; land, water, and fishing rights; religious and cultural freedoms; and, among others, issues of taxation, gaming and Indian trust monies.

“Our nation was born in genocide when it embraced the doctrine that the original American, the Indian, was an inferior race. Even before there were large numbers of Negroes on our shores, the scar of racial hatred had already disfigured colonial society. From the sixteenth century forward, blood flowed in battles of racial supremacy. We are perhaps the only nation which tried as a matter of national policy to wipe out its Indigenous population. Moreover, we elevated that tragic experience into a noble crusade. Indeed, even today we have not permitted ourselves to reject or feel remorse for this shameful episode. Our literature, our films, our drama, our folklore all exalt it.”

Dr. King’s reflection on the tragic history of Native Americans is largely unknown today. However, at the time his words inspired a deeper focus on how the history of oppression has affected all people of color in America and his legacy lives on in those who continue to seek justice and equality.

Dr. King not only “talked the talk” on behalf of Native Americans and other oppressed people, he also “walked the walk.” For example, In the late 1950’s, King worked with tribal leaders of the Poarch Band of Creek Indians working to desegregate their schools in south Alabama. The tribe reached out to King after learning of his desegregation campaign in Birmingham. He immediately became actively involved.

Also in “Why We Can’t Wait,” King wrote that America’s economic system of capitalism was one that exploited people of all races and welcomed people of all races to join the movement against racism and poverty. He called for those within the movement to fight for bold, transformational change to combat what he identified as “the three evils of society”: racism, economic exploitation, and militarism.

In retrospect, observers note that both the civil rights movement and the Native American rights movement have had a major impact on the U.S. and the world at large. Dr. King played an immeasurable role in both these movements propelling progress that is ongoing to this day. Effective activists continue to build a multi-racial coalition working towards the ideal of liberty, justice, and equality for all people.