Tribes under attack in Montana 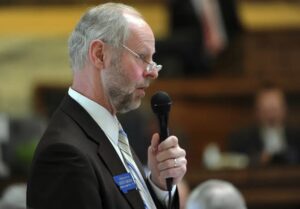 Every tribe knew that eventually state legislatures would move to eliminate Indian reservations. During the Termination Era of the 1950’s and 1960’s, the federal government vigorously pursued a policy bent on terminating tribal recognition and treaty status.

Congress passed Public Law 280 in 1953 dividing states into two groups: one where limited sovereignty remained, and the larger group, where states assumed jurisdiction over reservations. South Dakota was in the first group, although the state attempted to extend their jurisdiction onto reservations in 1964. This attempt failed at the ballot box, after the South Dakota Supreme Court ruled that if the state wanted jurisdiction inside reservations, they would have to assume all the financial responsibility, and they only wanted to control the reservation highways. This forced the GOP to have to campaign to defeat their own referendum, at which, they were successful. The law was subsequently changed in 1968 with an amendment to the Civil Rights Act, so that only enrolled tribal members could vote on state jurisdiction, and it is highly unlikely any tribe would ever vote away their sovereignty.

Two attempts have been made recently in the state of Montana by conservative political legislators and candidates to undermine the status of tribes and limit tribal participation at the ballot box.

As reported last week in the NSNT by Clara Caufield, Drew Zinecker, a prospective GOP legislative appointee, remarked: “If the reservations want to say they are independent countries … but they want a lot of handouts, why are we counting their ballots?”

The federal monies and supplies reservations receive are not “handouts.” They are treaty obligated reparation for land and resources taken, and that would be every square inch of the state of Montana, and these reparations have no time limit. Zinecker misunderstands the basic reality of tribal sovereignty.

Sovereignty between separate countries like Canada and Mexico differs from tribal sovereignty. Sovereignty between two countries is not based upon treaties or reparation. As “domestic dependent nations,” tribal sovereignty is filtered through a ward status, where the government actually owns and controls everything, but holds tribal lands in trust. But these lands do not belong to tribes. Through plenary power, an Act of Congress can terminates any treaty with any tribe at any time for any or no reason. Tribes declare their sovereign status inviolate, not something granted, but something inherently extant, but this is an assertion without teeth, a bombastic, reality-hostile declaration.

In fact, tribes have no sovereignty against the federal government if plenary power can be applied arbitrarily at any time. Where tribes do have sovereignty, where it greatly protects their interests, is against the state. In the 1886 Kagama decision, the US Supreme Court declared that the worst enemy any tribe had was the state in which they reside. This is as true today as it was then, the Court citing “local ill feeling,” which has certainly prompted the actions of white conservatives in Montana.

As usual, racists create platforms to serve their racism, platforms crafted to appear to be principled concern, when they are ruses to impose racist exclusion. In this case, the conservatives know most tribal members will vote Democrat, and so pretexts must be contrived to undermine that vote.

Not that the Democrats are any real friend to tribes, but the GOP sees the tribal vote for Democrats as a threat, regardless of how sensitive and responsive Democrats actually are to tribal interest.

In addition, tribes occupy lands outside state jurisdiction, lands with energy and resources that represent billions of prospective dollars to outside development and exploitation. All of these factors are thrown into a communal GOP pot, and the result are attempts by state legislators like Keith Regier who submitted a proposal last week to the Montana legislature proposing asking Congress to consider alternatives to the reservation system. Understand, given a conducive political climate, Congress has the power to terminate all reservations, to amend or abrogate every single treaty. Although achieving that dark outcome is a long and difficult journey for conservative elements, every journey begins with a first step, and the GOP intent is to re-posture the political landscape so that the previously unthinkable, the termination of all reservations, graduates to an acceptance status where it can be discussed on the floor of Congress. The Montana legislature is not trying to create law, they are trying to prompt Congress to apply plenary power to achieve a long held dream—the elimination of Indians as separate nations, the end of sovereignty from state jurisdiction, so the state can move in and restructure the reservation world until it properly reflects the rest of the state, an alien reality which white people have painstakingly wrought.