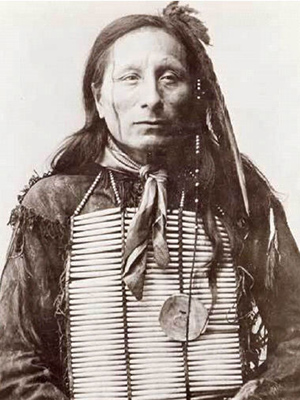 During his lifetime Tataŋka Ptečela (Short Bull) was instrumental in bringing the Ghost Dance to the Lakota People. After hearing about a new religion that promised to rid the earth of the scourge that befell them with the arrival of the Wasicu (white man), Tataŋka Ptečela was part of a delegation of eleven scouts that went to Nevada to investigate this newfound religion.

The following is an excerpt from the online source American Tribes that chronicles the story of Short Bull.

Tataŋka Ptečela or Short Bull was born around 1845 at Pass Creek on today’s Pine Ridge Indian Reservation. His family – nothing else is known about his parents – belonged to the Brulé Wazhazha band of chief Lips. By reservation workers and ethnologists Short Bull, is described as a friendly, gentle and benevolent personality. Nevertheless, as a reservation Indian, he always represented traditional values of Lakota culture.
1888 and 1889 were hard years for the Lakota. The reservation was haunted by droughts and epidemics, and the Washington government had passed the “General Allotment Act”, and the Lakotas lost to two-thirds of its land base. In addition, food rations had been cut. At the beginning of 1889, the Lakotas heard of a prophet and his new religion. For the first time the desperate Lakota drew hope. In March 1889, a council meeting, attended by the chiefs of the Pine Ridge, the Rosebud and the Cheyenne River Reservation, determined eleven scouts who were sent to Wovoka to get to know his teachings. Among the pilgrims who made their way to Nevada in the fall were Short Bull and his friend and brother-in-law Kicking Bear, a cousin of Crazy Horses. After their return in March 1890, Short Bull and Kicking Bear were invited by many Oglala, Hunkpapa and Brulé chieftains to introduce Wovoka’s teachings to their camps. The Brulés Crow Dog and Two Strike were among the first to be introduced into the new religion by Short Bull. Big Road and Little Wound, two prominent Oglala leaders, also supported the new religion.
After the tragic events at Wounded Knee Creek in December 1890, Short Bull, Kicking Bear and another 25 Ghost Dancers were imprisoned in Fort Sheridan, Illinois, in January 1891. In the following weeks, the causes of the events as well as the sanctions for the Lakotas were publicly discussed. William “Buffalo Bill” Cody, who had very good relations with General Miles, smelled a chance for his “Wild West” company. Cody offered to take the Ghost Dancers on a European tour. When the imprisoned Indians were offered the alternative “detention or Wild West Show”, 23 declared ready to go with Cody. On April 1, 1891 Buffalo Bill left with his “Indians” on the steamship S.S. Switzerland the United States to tour Europe. 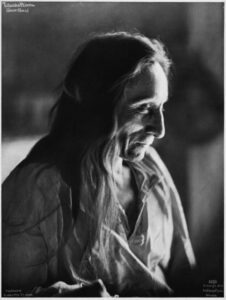 From the daily life of Short Bull during this time hardly any details are known. However on this tour, the first detailed report about the Ghost Dance from the perspective of a participant emerged. Short Bull dictated a twenty-page text to the Lakota interpreter George C. Crager (or Craiger), provided by Crager with the title “As Narrated by Short Bull.” According to Crager and a census in 1891/92 Short Bull had at that time two wives (Plenty Shell and Comes out) and 5 sons and a daughter living near Wounded Knee. One of his sons was John Short Bull(in 1911: 24 years old). His native Name was Shot-to-Pieces (–> Wounded Knee?)
At the beginning of 1892, some of the Lakota prisoners of war found that the eleven-month absence of their family was punishment more than enough. On March 4, 1892, Cody and 24 Indians, including Short Bull and eleven other Ghost Dancers, sailed on the S.S. Corean home. When Short Bull and Kicking Bear had hoped that they could return to their families, they saw themselves deceived. When the ship docked at Brooklyn Harbor on March 18, soldiers marched up and arrested the 12 Ghost Dance prisoners again. After long public discussions the two “fathers of the Lakota Ghost Dances” were released in October 1892.
Short Bull returned to South Dakota where he settled at Pass Creek. Because of a border clearance, this land was part of the Pine Ridge Reservation since 1890. From then on Short Bull – although Brulé Lakota – was considered an Oglala by outsiders.
About 1902 Short Bull and Kicking Bear visited Wovoka again. In the same year they travelled to Poplar to teach the Assiniboine Fred Robinson the Ghost Dance religion. What makes the conclusion, that both have remained true to the ghost dance.
In 1913 he met his old employer William Cody again, who had founded the “Col. Wm. F. Cody (Buffalo Bill) Historical Picture Co.”. This company filmed in 1913 the film “The Indian Wars”. Cody also wanted to film the massacre at Wounded Knee Creek at the original battlegrounds. This encountered the resistance of Oglalas. But Cody solved the problem. Over his old employees, including Iron Tail, No Neck and Short Bull, he invited the most ardent people to a meeting and after a big feast he got their consent. Today no complete copy of the movie is known.
In his later years Short Bull was known as Arnold Short Bull. On July 6, 1923 he died in his home on Pine Ridge. Even though he turned to the Protestant Congregationalists in his last years, Short Bull remained faithful to the doctrine of Wovoka all his life.