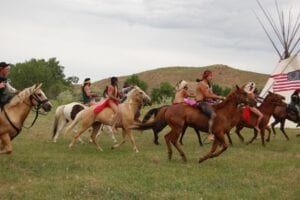 “War is never good; we go to war for peace.”

GARRYOWEN, MT—The grandstands at the June 25th anniversary re-enactment of the Battle of the Little Big Horn were packed to capacity—at least 2,500 spectators, mostly non-Indians. Once again, since 1989, the Realbird Clan, Crow presented a thrilling pageant about the famous battle involving Custer, the Northern Cheyenne, Sioux and Arapaho. It is a money maker for them and extremely educational to the audiences. The site is on Realbird land at Garryowen, where the actual battle occurred, where Custer crossed the river.

Ironically, the Crow were not participants in the battle, rather scouts for Custer who upon advent of the battle wisely decided to hightail it back to their camp. In those days, they, like other Tribes involved followed the guidance of tribal prophets and seers when it came to relationships with the whites. As the Cheyenne say: The Cheyenne did most of the fighting; the Sioux got the glory, and the Crows got the land.

Yet, the Realbirds have upon many occasions invited the Cheyenne and Sioux to participate in the re-enactment. “So far, nobody has taken us up on that,” he sighed.

On the other hand, Henry emphasizes that the pageant is based on the Cheyenne version of the Battle which they did not generally discuss until recent times. This comes from the oral tradition. As young cowboys, both Henry and his older brother Richard (deceased) cowboyed on the large Padlock ranch which then leased huge tracts of grazing lands on the Northern Cheyenne and Crow reservations.

Since the old days after the Battle, the Spotted Wolves and Realbird elders became friends, Pious Realbird and Bisco Spotted Wolf especially elders of the respective families, which has led to close ties even until this day. Pat Spotted Wolf, an older Northern Cheyenne cowboy whose father Spotted Wolf was in the battle shared his knowledge about that. Spotted Wolf told them the Cheyenne version of the Battle, which they now faithfully try to represent at the re-enactment.

The two-hour pageant scripted by Henry Realbird, a poet, educator and respected Crow elder, covers a wide historic swath—beginning with Native contributions in the American revolutionary days, including contribution to the Declaration of Independence continuing to the Battle, 1876.  Each of the significant events is portrayed by actors in full period costume. Throughout, Realbird constantly reminds the audience of Native American contributions to America, explaining the white western expansion and its effect upon the Tribes and the west.

Now in its 30th year, the Realbird Re-enactment has been refined nearly to perfection, replete with an all-Indian cast, wearing traditional regalia and who are nicely compensated for their participation, it being an honor for them.  The costumes are dedicated to authenticity. For example, during the 2021 event, a little boy clad only in paint, moccasins and a breech cloth, unfortunately had his breechcloth fall down to his knees. He paraded around unconcerned in his full natural glory until his mother came to “re-tie” him. That is authentic—Indians did not have BVDs.

The warriors are mounted on beautifully painted swift horses. As bucking horse stock contractors, the Realbirds own hundreds of horses, all of which seemed to be involved in the event, the young riders displaying amazing riding skills during the battle scenes. “These horses have a soul. Show them respect and talk good to them,” Realbird commented.

All throughout the drama, Realbird does an excellent job of explaining the significance of tribal customs related to war: counting coup; ceremonies, the ritual of moving camp, use of the Pipe, Victory Songs, ceremonies such as the Sitting Bull vision before the battle, warrior paint, the role of women as food gatherers, the role of men as protectors of the people, etc. He shows great respect for the other Tribes. For example, he carefully mentions American Horse, the Northern Cheyenne warrior who captured the 7th Calvary gridiron during the battle, a re-enacted scene the only time that has happened. That Flag is still among the Northern Cheyenne and greatly prized.

Of course, at the great 1876 Battle, Indians were half of the story, the U.S. Calvary the other half. Calvary re-enactors, volunteers from around the country each year convene at the Realbird ranch, providing the U.S. Calvary School, a non-profit under the direction of Keith Herron, Montana National Guard who has become a close friend of the Realbirds due to the re-enactment. The school, consisting of about a hundred “soldiers” and support crew descend upon the Crow reservation about a week before the re-enactment to rehearse, learning the traditional cavalry riding style, dressed in authentic period attire and using that tack, often displayed on a horse rented from the Realbirds, dedicated to historical accuracy. Each cavalry actor plays the role of an actual soldier such as Phil Hines, Texas who has played the role of Regimental Sergeant, 7th Calvary since 2007. The re-enactment week is an annual highlight for most of the re-enactors, he said.

The Realbird re-enactment is well worth seeing—a historical lesson told by Indians about Indians. Held for three days centering around the June 25 anniversary at Garryowen, MT, just a wink and nod from the historic battlefield, it is something for Battle enthusiasts to put upon their calendar.