Part 2 of a two part series 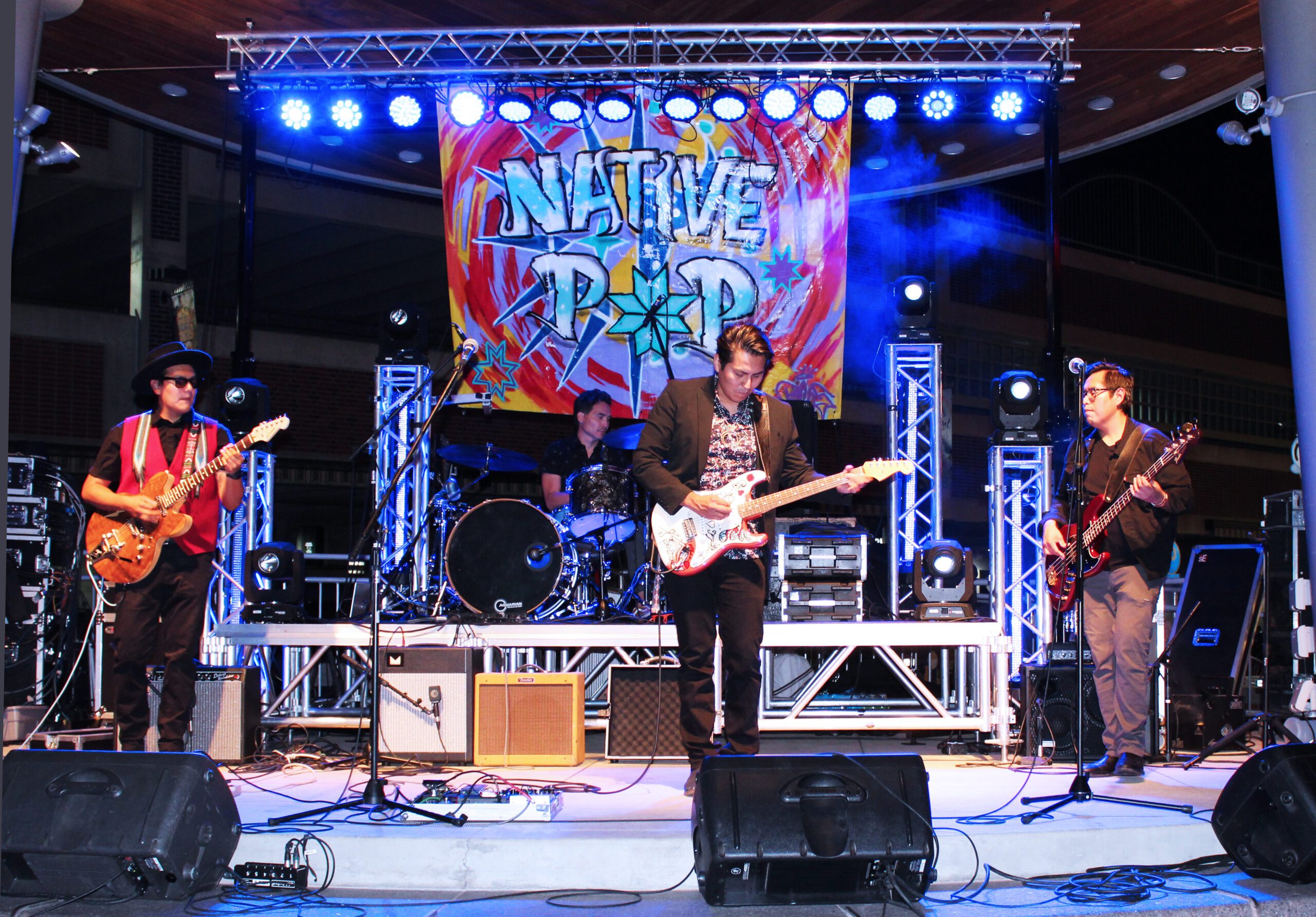 RAPID CITY – “Captivating, mesmerizing, phenomenal” could aptly describe the performances that took center stage at the recent Native People of the Plains POP Fest 2022 at Main Street Square on Sept. 3.

Having the inside scoop on up-and-coming performers on the Native American music scene is Scotti Clifford’s forte. Clifford (Scotti Clifford & Spirits Cry) used his connections to the Native Guitars Tour and other venues to open doors for Lafawn Janis, executive director of Native Pop, who booked some of the most happening Indigenous performers to the stage at POP FEST 2022.

As a protégé of Clifford, Welby June has been nurtured under the guidance of one of Lakota Country’s top musicians. Clifford, who began his musical career as a songwriter and backup vocalist/guitarist for Indigenous, has not only honed his own musical genius, but affectionately promoted the career of his progeny. 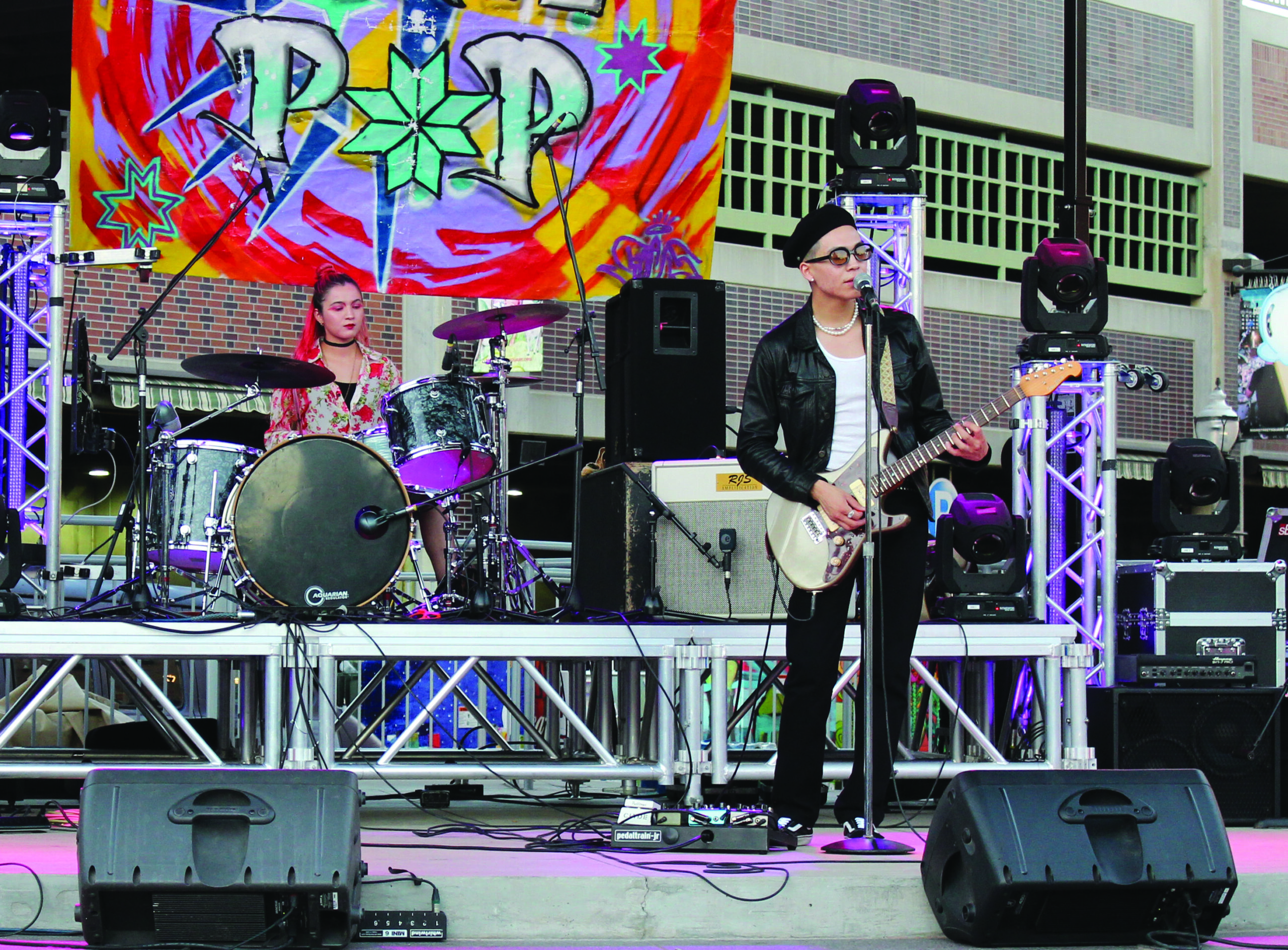 Welby June, musician, artist, songwriter, and composer took to the stage and performed music from his latest track “Shades of U.” (Photo by Ernestine Anunkasan Hupa)

Welby June, musician, artist, songwriter, and composer took to the stage and performed music from his latest track “Shades of U.” With his sister Wahpe Louella on drums, Welby June’s soft, silky and melodic voice wooed listeners, leaving them wanting more. You can find Welby June’s music on Spotify.

Downtown Rapid City next enjoyed a musical experience that took one through the canyons and mesas of the southwest via the “contemporary indigenous expressions” of Earth Surface People. 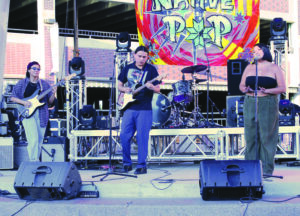 Earth Surface People is an indigenous jazz collective founded by producer and songwriter Yellowhorse. Their music is described as synthesized R&B with fusion, jazz, and art rock elements.

Dakota Yahzi, Diné, accompanied by Diné singer and songwriter, Nanibaah Talley performed tracks from their most recent album “Nihookááʼ diyin dineʼé” that not only brought to mind the classic tunes of Red Bone and XIT but also a jazzy blues sound reminiscent of Etta James and Aretha Franklin.

Nanibaah’s “soulful and velvety” voice adds a refreshing element to the performance of Earth Surface Peoples repertoire as she, “Belts out a beautiful blend of jazz and neo soul.”

Next on the line-up was “Liv the Artist” (Alt-Neosoul/Indie-Electronic) a multi-talented instrumentalist who gave a compelling solo performance.

Liv, Olivia Komahcheet, Oto and Comanche from Oklahoma, blending the guitar and electronic keyboard, transcended the moment and took one into her world. LIV at a young age began to play the viola, cello, guitar and piano and has now matured into a sought-after performing artist.

Liv has published score compositions in First Americans Museum, is an official platinum producer of Timbaland’s “Beatclub,” and is a 2021 Alumni of the Sundance Film Festival’s Composers Lab. She is also a score composer and illustrator endorsed by Keeley Electronics Guitar FX Pedal Co.

DEF-I and Mato Wayuhi, Hip Hop artists, who had performed earlier in the day joined LIV onstage and gave an improv free-style rap session. The young artists who seemed to be enjoying themselves, added an enlivening and personal element to the day’s festivities.

Liv was followed by Mni Luzahan Otunwahe’s own Wake Singers (Indie Rock) which include band members Doug, Mike, and Reed Two Bulls along with Dan Carroll and Dyami Giroux. 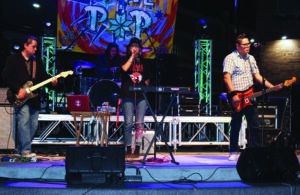 In 2021 the Wake Singers were the recipients of First People’s Funds Artist in Business Fellowship. According to the First People’s Fund website, “Their musical journey started when they were teenagers living in Rapid City, SD, playing music in their basement. Art and music were always incorporated into their ideas. After playing in various bands in Rapid City they left to attend art school at the Institute of American Indian Arts, where they were able to experiment with the visual, writing, and musical aspects of their vision. After completing art school, they brought back what they learned to their own communities of Red Shirt Table and Rapid City, SD.”

The Wake Singers currently have a recording studio at the new location of Racing Magpie at 801 E St Andrew St in Rapid City. They recently performed at Racing Magpie’s Block Party which showcased Racing Magpie’s new art space for Indigenous Artists and performers.

Then POP Fest brought to the stage their finale performance, the phenomenal Navajo Bluesman, Levi Platero.

According to his biography, “Levi Platero is a Diné blues artist from To’hajilee, New Mexico whose intuitive guitar playing soulfully encapsulates a lifetime of experience. At nine years old, Platero began playing on a fifty-dollar guitar from a pawn shop. By the time he was fourteen, he was performing with his father, Murphy Platero, and cousin Douglas Platero in their family band, The Plateros.”

At fourteen Levi performed with the Lakota Blues band “Indigenous” for a year and a half before deciding to make his own music.

You can find his music and his upcoming performances on his website at www.leviplatero.com.