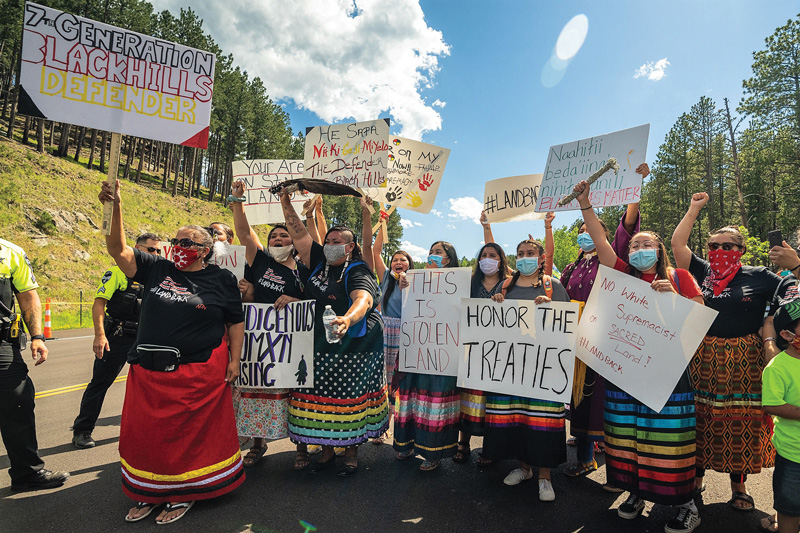 “This decision will greatly enhance the ability of all the people to gather medicine and pray without the intrusion of explosions or lights. Our sacred land and sites will remain at peace while still being the sanctuary for the animals that can still call the Black Hills home or rely on the sanctuary for their journeys,” Frazier said in a message from tribal headquarters in Eagle Butte.

The Great Plains Tribal Chairmen’s Association approved a resolution opposing Noem’s effort to obtain a National Parks Service permit for the fireworks display at the Mount Rushmore rock carving on the eve of this coming Independence Day. When NPS refused to grant a permit, Noem filed a federal lawsuit against Interior Secretary Deb Haaland to overturn the decision.

Noem garnered backing from 17 state attorneys general, who filed an amicus brief endorsing her position. Meanwhile, the Cheyenne River Sioux Tribe asked to intervene as a defendant on Interior’s side.

Sisseton-Wahpeton Oyate Tribal Chair Delbert Hopkins Jr. told Haaland he was in “full support” of the Cheyenne River Sioux Tribe’s motion. “CRST has every right to join the case. The Fort Laramie Treaty still stands, and the Black Hills still rightfully belong to the Oceti Sakowin (Great Sioux Nation),” Hopkins wrote Haaland in a letter from tribal headquarters at Agency Village on the Lake Traverse Reservation.

In U.S. v. Sioux Nation of Indians in 1980, the Supreme Court affirmed the tribes’ jurisdiction on 1868 Fort Laramie Treaty lands — including the site of the carving of four presidents and the surrounding Black Hills.

“Governor Noem should have consulted with tribes before planning an event on their land. Mount Rushmore itself is a Lakota sacred site, The Six Grandfathers,” Hopkins noted. “We are opposed to this vulgar nonsensical political stunt,” he added.

Attorneys for the Governor’s Office sought to block tribal intervention in the case. However, the court admitted the tribal government and Tribal Historic Preservation Officer Steve Vance to the defense.

On June 2, Roberto A. Lange, chief judge in the Central Division of South Dakota U.S. District Court, denied the mandatory preliminary injunction the plaintiff sought to obtain the special use permit for fireworks in Noem v. Haaland.

“I am disappointed that the court gave cover to this unlawful action with today’s decision. But rest assured, this fight is not over. My legal team will appeal this incorrect decision so that we can return the fireworks celebration to Mount Rushmore and celebrate our nation’s birthday at America’s Shrine to Democracy for next year and in the future.”

The judge ruled out the state’s main claim — that the NPS decision to deny the permit request was arbitrary and capricious. He accepted the five reasons that National Park Service Midwest Region Director Herbert Frost cited for denying the permit. They are: tribal concerns, the state of the Covid-19 virus, fire danger, perchlorate levels in the water at the park, and an ongoing construction project.

Frost determined, “The park’s many tribal partners expressly oppose fireworks at the memorial… . [W]e are committed to respecting tribal connections with the site and building stronger relationships with associated tribes.” Frost, a Ph.D. in Wildlife Ecology, has worked at NPS for more than 25 years, 13 of them in senior leadership positions.

He noted that the parks service and 13 tribes are in the midst of conducting a Tribal Cultural Sites and Traditional Cultural Properties Survey on the nearly 1,300-acre memorial. The study was slated for 2020; however, due to the Covid-19 pandemic many tribal governments shut down and restricted travel. Results have been delayed until summer 2021.

The NPS undertook the survey to comply with the National Historic Preservation Act on the Environmental Assessment necessary to the permit that Noem brokered with the previous U.S. presidential administration of Donald Trump. Noem campaigned nationwide for Trump’s reelection and wanted him at the monument for a pyrotechnic display during election year.

The tribes raised 13 concerns, including opposition to shooting off fireworks at the memorial, “and then felt betrayed” when during mandatory tribal consultation, Trump announced a “big fireworks display” there for Independence Day in 2020, the court found.

Tribal elected leaders stridently opposed the event and Native treaty rights advocates blocked the main route to the monument in a civil disobedience action on the occasion of Trump’s visit. Noem called out the National Guard with lethal force to disburse peaceful demonstrators carrying “Land Back” banners.

“Tribal partners have expressed … disappointment that the event was permitted after their strong objections and before the TCP survey could take place,” Frost told the judge.

A 2006-2008 archaeological survey identified two prehistoric cultural sites and an isolated artifact listed as a prehistoric lithic, the court record shows. “The land encompassing Mount Rushmore National Memorial reflects human habitation and development for thousands of years, from the earliest stone tools of tribal populations to the first homesteads in the Black Hills,” the court establishes.

However, no tribal cultural preservation officer or tribal archeologist participated in the survey. The tribal representatives present at a Jan. 15, 2020, meeting with NPS asked for a full tribal cultural survey of the lands making up the memorial and an additional government-to-government meeting, at which time they would present a recommendation based upon the results, Frost testified.

To stop short of that federal requirement for full consultation on the Environmental Assessment for the fireworks was like forcing the tribes to eat a rotten meat sandwich, according to one Spirit Lake Sioux Tribal Historic Preservation Officer, who said:

“You can put all the lettuce and tomatoes and cheese on a rotten piece of meat, but that meat is still rotten. That’s what happens at some of these meetings. All this is, is dressing and we have to eat that rotten sandwich. Just once it would be good to walk away from a meeting and knowing that the federal agency actually listened to us and takes our comments and concerns seriously and do that. That would be great.”