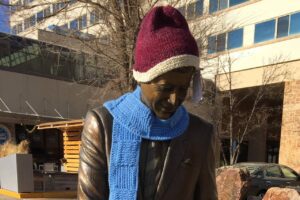 RAPID CITY—It’s time to bundle up Millard, Zachary, Ulysses and the 40 other downtown presidential statues in winter apparel items to benefit those in need.
Monday marks the seventh season when winter apparel items can be placed on the downtown statues. During wintery conditions, items such as gloves, scarves, ear muffs, hats, coats, even socks, are collected by those in need of the items.
Mayor Steve Allender authorized the placement of winter apparel items on downtown statues in November 2015 and the City Council approved a resolution in April 2016 allowing items to be placed on the statues annually from November 15-March 15. The public has responded in impressive fashion each winter season, keeping the presidents – even the statues of First Dogs Barney and Liberty – attired in various forms of colorful and warm winter apparel items.
“Each winter season, there is a tremendous level of community support for this effort,” said Mayor Allender. “A simple gesture of placing that pair of gloves, winter scarf or stocking cap on a downtown statue will have an immediate impact on the person who stops to collect them. And it impacts the person donating and placing the item on the statue, knowing they are making a difference in a person’s life.”
The authorized placement of winter apparel items on the downtown statues coincides with National Hunger and Homelessness Awareness Week, this year observed November 14-20. Mayor Steve Allender will present a proclamation at Monday’s City Council meeting declaring next week as National Hunger and Homeless Awareness Week., bringing awareness to the issues of food insecurity, poverty and homelessness affecting children and adults in the community. The proclamation also recognizes the work of numerous community organizations to provide support services and increase public awareness about those living without homes and those living in need in the area. These organizations include the Hope Center, Volunteers of America, the Black Hills Regional Homeless Coalition, the Youth Task Force, Cornerstone Rescue Mission, Working Against Violence, Inc., Feeding South Dakota and others.
According to the Department of Community Development, Rapid City, the total population of Rapid City is 74,703. The American Indian and Alaska Native Alone Population is 9,851 (13.2%); White; American Indian and Alaska Native Population: 2,677 (3.6%) and other Race Categories that include American Indian and Alaska Native Population: 521 (0.7%). More startlingly, according to 2021 census date American Indians make up 76.8% of the homeless population.

Clara Caufield can be reached at editor@nativesunnews.today.