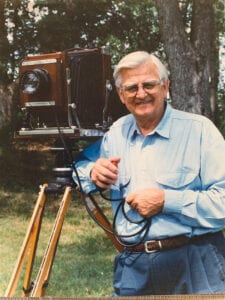 Bring yourself and your memories! Bill’s family will host the picnic, and will provide all food and beverages.

His forceful determination and gentle consideration for others are part of his legacy, alongside his photographic documentation of Black Hills historical events. He grew up in a home where all people were welcomed, in a time when that was not necessarily the norm. His parents, Amos and Emma Groethe made sure to imbue all their children with openness and love. Bill maintained those Groethe family values throughout his life. From a young age, he knew that he wanted to be a photographer and focused on that for the rest of his 97 years. Bill was truly one of a kind, and He Sapa will forever be changed by his life here.

Deeply committed to equity, Bill educated many at First Photo, Mount Rushmore, and around town about the true history of our area. He cared about this community, and wanted to see everyone in it thriving, making a living wage, and honestly caring for their neighbors. Bill was committed to quality and to supporting small businesses so that our community would continue to thrive. He was analytical, detailed, and precise in everything he did. His plan was for generations to come, so that they would have a documented historical record and so that his photos would last for as many years as possible. Bill knew that one could have a successful business while remaining committed to one’s values. He treated all of his photographic subjects with respect, portraying everyone who sat for a portrait with dignity and care.

Bill had a love of life that was unmatched. Enthusiasm for everything he did was part of his everyday life. He had a strong work ethic, but still tried to take most weekends off (part of what he recommended for longevity), spending quality time with his children and grandchildren. When he was younger, he always made time for sports and was very athletic. Diving, swimming, snow skiing, water skiing, and hunting. In 1953, Bill married the love of his life, Alice. They met on the ski hill in Colorado, and afterwards Bill told his mother Emma that he had met the woman he was going to marry. They loved and supported each other through many hardships and joys during their 67 years of marriage. They worked up until 2020 together at First Photo.

Bill was extremely committed to his entire family, and loved them deeply. Bill is survived by his wife, Alice Lorraine Marks Groethe; siblings, Robert Jackson Groethe, Joan Lucille Solon, Jean Elizabeth Diggins; children, Jane Ann Groethe Mincks (Ron) and Mark Howlett Groethe (Jeannine); grandchildren, Emma Beth Mincks, Benjamin Joseph Mincks, Farrah Francine Beard, Hannah Jo Mincks, Miranda Michelle Ririe Nizam-Aldine, Zachary Nizam-Aldine, Derek W. Ririe, William Ryan Groethe, Emily Beth Groethe; and great-grandchildren, Tiberius David Nizam-Aldine, Bridger Bear Mincks, and Elowen Zahra Nizam-Aldine. Amos and Emma had 13 children and over 65 grandchildren and Bill is survived by many nieces and nephews on the Groethe and Marks sides of the family that were very special to him. He considered everyone in this community to be of great importance, and had many wonderful neighbors. His family would especially like to thank his neighbors and friends who considered him family.

He was preceded in death by his parents, Emma Sophia Hovland Groethe and Amos Groethe; and his siblings, Kathryn Louise Satt, Amos Jr., Marian Wilson Rendler, Roland Eric (Bud), Homer Perrin, David Rowe, John Bollinger Withers, Dorothy Ann, and Eleanor. As well as by numerous relatives, including several nieces and nephews; his mother-in-law and father-in-law, E.F. and Alice Marks; and so many special friends.