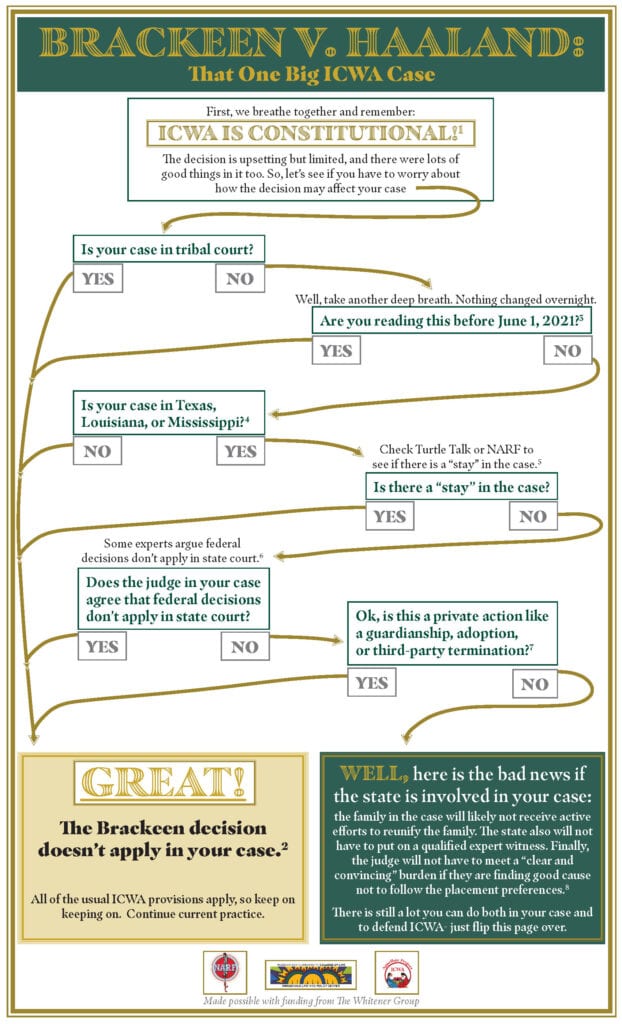 NEW ORLEANS, LA. – A recent federal court ruling here reaffirming the constitutionality of the Indian Child Welfare Act’s main provisions gave rise to a training session April 29-30 about implementing the law that advocates consider “the gold standard” for protecting Native youngsters.
The National Indian Child Welfare Association is offering the training via a virtual platform after the U.S. Fifth Circuit Court of Appeals upheld the defense of the Indian Child Welfare Act, or ICWA. A 325-page decision on the closely-watched case of Brackeen v. Haaland earlier in the month prompted other groups to update their participants, as well.
Writing the majority opinion, Judge Gregg Costa countered plaintiffs’ argument that the ICWA infringes on the spirit of equal protection for all by determining child placement based on race. He said the law and implementing language stand “because they are based on a political classification and are rationally related to the fulfillment of Congress’s unique obligation towards Indians.”
Dana Hanna, a Rapid City attorney specializing in ICWA cases, said plaintiffs “were basically making a state’s rights argument, and this opinion basically blew that away.” At the heart of the decision is the unique relationship of tribal nations to federal government, according to Hanna, who is a member of the Sicangu Oyate Bar Association of the Rosebud Sioux Tribal Court.
“The whole purpose of ICWA is to protect Indian tribes and Indian children from state actors,” he told the Native Sun News Today. “Racism in the state court system has been the rule rather than the exception. States would prefer to place Indian children with white families.”
Hanna represents the Rosebud, Oglala, and Cheyenne River Sioux tribes in state courts in cases governed by the ICWA. He has represented tribes in cases involving Indian children in state and tribal courts in South Dakota, Nebraska, Missouri, Oklahoma, Colorado, Minnesota, and Utah.
Congress passed ICWA in 1978 in response to large numbers of Indian children being taken from their homes and placed in foster or adoption care outside of their communities. Hanna and other ICWA supporters argue that a law protecting Indian children, families and communities from separation is no less important today than it was decades ago.
“There’s a belief among certain state actors, as well as the anti-ICWA people that ICWA is just sort of a political bone thrown to tribal nations” for all the broken treaties and kids forced into boarding schools, Hanna said. “But there’s so much evidence that shows that Indian children are better with Indian families, even if it’s not their mom and dad. They’re better off for reasons that are obvious to Indian people.”
Indiana, Louisiana, and Texas were appellants in the case. In solidarity with them, Ohio issued an amicus brief urging the court to rule against the constitutionality of the ICWA. It was the only state to do so. Conversely, 21 states filed briefs in support of ICWA. South Dakota, a state with one of the highest population shares of Native people, was noticeably missing from that group.
“That’s (Gov.) Kristi Noem and the attorney general,” said Hanna. “This is a fact that should be known to everybody. If you don’t stand up for Indian people and for ICWA and for Indian families, then you’re against them.”
It’s poignant that South Dakota decided not to support the defense, because of the high numbers of ICWA cases in the state.
“Out of the entire state, two-thirds of child welfare cases are ICWA cases. It’s four-fifths in Rapid City,” Hanna said, referencing information he received from South Dakota’s Department of Social Services.
The judges in the New Orleans Fifth Circuit did find some parts of the law unconstitutional. So, the fine print in the decision excuses Louisiana, Mississippi, and Texas from compliance with child placement recordkeeping and expert witness requirements.
Hanna doesn’t think these exceptions will have an immediate or vast impact on children’s pending cases. However, this latest interpretation of the law, together with recent Bureau of Indian Affairs ICWA regulations and guidelines, has led children’s advocacy groups to offer orientation.
Calling the ICWA the “gold standard of child welfare policy”, the National Indian Child Welfare Association has scheduled training “to advocate for full compliance with this groundbreaking legislation and defend it against attacks from those wishing to overturn it.”
It has forged the Protect ICWA Campaign with the National Congress of American Indians, the Association on American Indian Affairs, and the Native American Rights Fund. One result is the creation of a decision tree graphic to help those with cases understand how this decision might affect them.
One question on the minds of many legal experts now is the possibility of a U.S. Supreme Court ruling on ICWA’s constitutionality. Hanna thinks that would not happen in the near future but expressed concerns about the looming prospect. “Indian legal groups are afraid and anxious about that possibility because SCOTUS has not been particularly friendly to Indians in the past few years,” he said.
Meanwhile, Hanna is co-counsel on a Native class action civil rights lawsuit being appealed in the U.S. Eighth Circuit after he won a challenge to South Dakota authorities’ policies and practices in the removal of Indian children from their families.