Galena, and a large scar on the land

Galena, and a large scar on the land 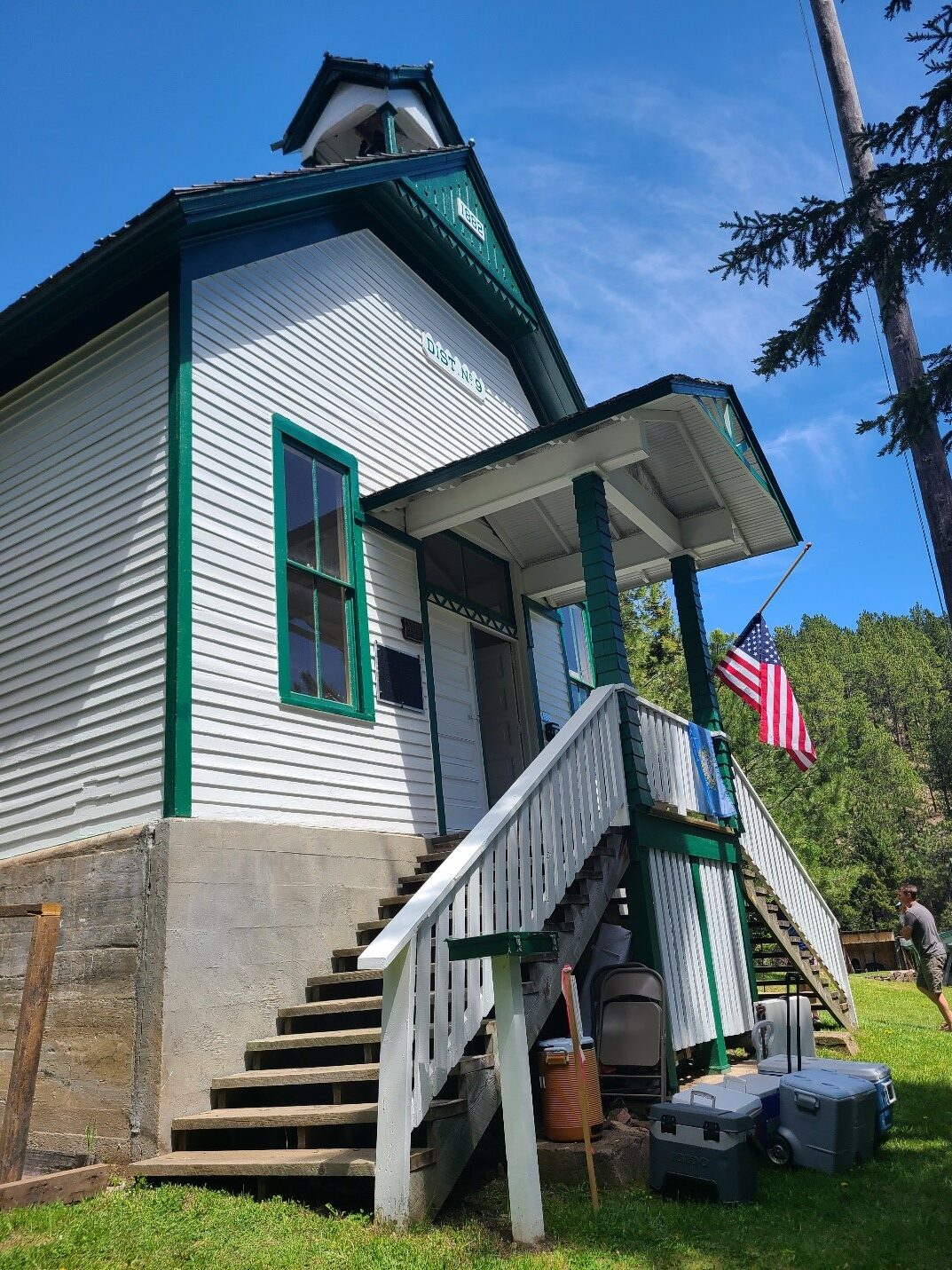 Galena, a once prosperous Black Hills mining town, is now just a small cluster of houses, but at one time it was the site of several mining operations. The first Non-Native and African-American to enter the Black Hills, set a claim at Galena, and would be buried in the town cemetery, a lady known as Aunt Sally, or Sarah Campbell. The town, was originally settled in 1876. While gold was the primary driving force, a strike of galena, a natural vein found in lead and silver, suddenly found miners working the silver claims they’d stake out. By October of 1876, the town was made up of an assay shop, a few businesses, a boarding house, and 75 residents in the mining camp.

The list of mines included the Branch Mint, the Gilt Edge Main, the Golden Crest, Oro Hondo, and three named Emma, after an inspiring young woman who worked for the local boarding house. As the needs for lumber grew, a sawmill was quickly set up, and more mines came into play, like the Sitting Bull, Florence, Merritt, Washington and El Refugio. Surrounding this mess of shafts and drifts, the town would add a physician, a shoemaker, two hotels, restaurants, saloons, a tin shop, two more sawmills, several retail stores and an opera house.

In 1877, the town would finally gain its own post office, a smelter was built, and by the end of the year, population was at 400 people, and 75 homes for permanent residents. As the word got out about how well Galena was doing, there would be some who would make efforts to consolidate things. One such fellow, Colonel JS Davey, in 1878, made an effort to buy up several mines, including the Florence, the Sitting Bull, and the Yellow Jacket. He would then build a new mill. The following year, he would see the Sitting Bull Mine ship out $14000 in silver and lead production. Three years later, the town would add newer cabins as older ones were replaced, there was a barbershop, grocery stores, another restaurant, a hardware store and two more hotels were built. Stagecoaches would add Galena to their routes, and a telephone line would be installed. The town built the schoolhouse in 1882, the same year a Catholic church and a Methodist church were built. However, the preacher for the Methodist church ran off with the church funds, so it never officially opened. It was primarily used for dances and as a social hall.

In 1883, things started to come apart for the Sitting Bull mine, as a nearby mine, the Richmond Mine, disputed the property, feeling the Sitting Bull had tunneled into their claim. While the case worked its way through the courts, most of Colonel Davey’s properties ceased operations, and in turn, the population suffered. When the case went against him, Davey abandoned his mining claims and headed west to the Idaho goldfields. He had lost a good portion of his money due to legal expenses, and the falling prices of silver, caused several mines to shut down. A small uptick in 1895 brought some work back, but after two years, a company called Union Mining Company bought most of the surrounding mines and an effort to build a large stamp mill was scrapped. At its height, the town of Galena had nearly 2000 residents. But by 1900, depletion had caused mining operations to look in a different direction. In 1902, a railroad was built into the town, which led to a short resurgence for a few mines, like the Union Hill, Gilt Edge and the Branch Mint mines. By 1912, even the Sitting Bull Property, now joined by the Richmond Mine, would go into receivership, the Railroad would be discontinued that same year and even a newspaper would report that “Galena is nothing more than a post office.” In 1929, the railroad tracks would be pulled up, and the only mine still operating would be the Double Rainbow. The Gilt Edge, reopening in 1940 would bring a little life back to the town, but in 1943, even the school would close, and more buildings within the town site would be cannibalized for their lumber, while other buildings would find new life, such as the Borsch Boarding House would become the Borsch Resort, a quiet retreat to visitors wanting to get out into the country. A last major operation in the area was in the 1970’s, when Homestake Mining Company reopened several mines after silver became profitable for a short time due to the Hunt Brothers cornering the market, driving the price up to 50 dollars an ounce.

Today, Galena has about 25 residents who still live there. The Schoolhouse, which still stands, is looked after by a group of Historical Society folks, who host a “Ghost Walk” every June. In the Walk, you can see several of the structures, the old school inside, the original assayer’s office, and the trestle where the train used to run. There’s examples, of where the headstones have been repaired or replaced, and the cemetery is well-maintained too. Two of the features, they let you take in on this event, is the Hercules Walls, a set of rock walls that were set up for a mill that was never built, and Sammy Moll’s Digs, a location along the grade the railroad followed into the town.

Dating back to the late 1800s, the Gilt Edge mine would see sporadic mining dating up until the 1920s.. Steady production, by the 1970’s would see more development and extensive mining production for gold, and in 1986, Brohm Mining Corporation would switch the mine to an open pit format, cyanide heap goad mine operation. This would go on until 1999, when BMC would abandon the site and their ongoing water treatment responsibilities to address the heavy metal laden water that was constantly generated from the exposed high walls of the three open mine pits, as well the millions of cubic yards of acid-generating spent ore and waste rock remaining at the site.

Recently an Act, called the Gilt Edge Mine Conveyance Act, would work to turn about 266 acres of this land to be purchased by the state. The primary idea is that the state would finish the cleanup, after the federal government has completed their cleanup efforts. South Dakota’s representatives, Rounds, Thune and Johnson partnered to submit this bill, but in talking to Ryan Brunner, the commissioner of school and public lands for South Dakota, there is still a long road ahead for the lands, even decades, before the land could be used for hiking or biking. Efforts to remove the heavy metals from the water, to allow it to drain into the strawberry creek safely, is a good first step, as is covering the area with high grade plastic to keep water from leaching into the area, then covering that with grass.

The post Galena, and a large scar on the land first appeared on Native Sun News Today.