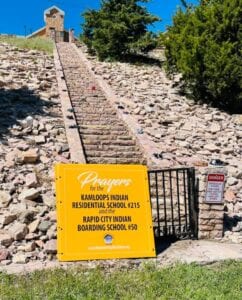 “Our team’s prayers go out to the relatives and descendants of the 215 children discovered buried in the unmarked graves at the Kamloops Indian Residential School,” Remembering the Children said in a social media post inviting the public to the afternoon prayer.

Team member Amy Sazue asked sympathizers to donate children’s shoes for local families in commemoration of the fallen youngsters. Donors deposited the footwear on the stone stairway of the Oyate Health Center, site of the former school.

Organizers also invited the public to learn about history of the local school on June 5 at Osh Kosh Park, aka Founders Park. They are seeking volunteers to join in designing a Children’s Memorial Park and sculptural garden at the former school site. The location is now held in trust by the Oglala, Cheyenne River, and Rosebud Sioux tribes.

The occasions in Rapid City were among many continent-wide to commemorate Kamloops’ horror. To show solidarity with the cause of justice for survivors, long haul truckers from across Canada caravanned their big rigs to the town. A motorcycle brigade rolled in as well.

On June 2 , the Tk’emlúps te Secwe̓pemc First Nation Chief and Council, along with the First Nations Leadership Council, met with the United Nations Special Rapporteur on the Rights of Indigenous Peoples to discuss how the U.N. can help hold Canada’s federal government accountable for its role in the residential school tragedy.

During the 120 years of Canada’s Native boarding school operations ending in 1970, “the practice was not to send the bodies of students who died at schools to their home communities,” according to Canada’s Residential Schools: Missing Children and Unmarked Burials — The Final Report of the Truth and Reconciliation Commission of Canada.

The commission estimated that at least 3,200 of the 150,000 children who attended the residential schools died there. Of the recorded deaths, half didn’t list a cause, and a third didn’t even list a name.

Canada’s first Prime Minister, John A. McDonald, is quoted in 1883 advocating the residential school sequestrations, saying: “When the school is on the reserve the child lives with its parents, who are savages; he is surrounded by savages. Indian children should be withdrawn as much as possible from the parental influence.”

In the United States, the federal government operated boarding schools to assimilate Native children from the 1800s to the1960s, including the Rapid City Indian Boarding School (1898-1933). Their philosophy was grounded in the 1892 speech “Kill the Indian and Save the Man,” delivered by Capt. Richard Henry Pratt at George Mason University.

However, as with Indian boarding schools in Canada, the mortality rate was high, and the U.S. government did not keep track of the deaths or burial sites of the children. Only after years of independent research, including in the federal archived school records, have community members established that some children died at the school, some while traveling to or from it, and others while trying to escape it.

Native Sun News Today Publisher, Tim Giago, a boarding school survivor, said, “I know there are many children buried at the boarding schools in South and North Dakota. I know because when I was a student at Holy Rosary Mission, I helped dig the graves of some of the students that died there.” He added, “The entire saga of the boarding schools needs to be thoroughly investigated because so many promising lives were permanently damaged at these schools.”