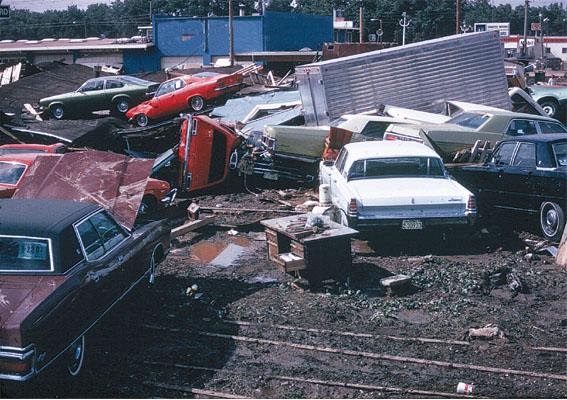 RAPID CITY—Every year just about every newspaper in the Black Hills is obliged to do a story about the 1972 Rapid City Flood. If you look closely, you will see they sometimes hardly bother to change the wording in the opening sentence. After 49 years of writing about the same event, maybe they can be forgiven for not being able to generate a fresh angle. Most of these stories are written by journalists who did not live through the Flood. Not the case at NSNT.

That first-hand experience helps us look at the 1972 Flood from many angles, especially the perspective of the Rapid City Indian Community. While much has been penned about the collapse of the dam and the devastation to the Rapid City west of the Gap, and the flood waters that tore down the length of Omaha Street, piling cars five deep on top of each other, very little attention is applied to the Lakota neighborhood that ran from West Boulevard east to Fifth Street, and from Omaha Street north to the elevated ground above the present-day Civic Center.

Many who lived in that neighborhood, spent time at Mother Butler and the community center. Ghosts echo in the minds of those that remember that long-lost neighborhood, remember the sound of the dogs barking, kids playing, basketball sneakers squeaking on the gym floors. Thousands of people called that neighborhood home, but most of the city has forgotten it ever existed.

That is why the obligation remains to set the table for those that do not remember the Flood, were not even yet born. The rest of the country primarily thinks of one thing when they think about June 1972—Watergate. Rapid City’s Dick Green was the starting second-baseman for the Oakland Athletics that season. The A’s would go on to defeat the Cincinnati Reds in the World Series. Green’s father would open Green’s Moving and Storage that next year, in a neighborhood off Chicago Street that would achieve an unusual status during that flood. 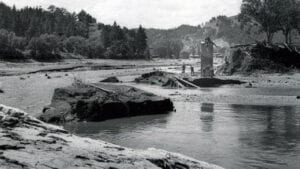 June 9, 1972 was a Friday. Dawn broke to perfect weather, and there was bright sun and blue skies. Everything was very green because it had been a nice, wet spring, but this also meant the ground was fairly saturated. Western South Dakota is known for its low humidity but this would be a day where humidity skyrocketed by midmorning. People dripped sweat even standing in the shade. While suffocating humidity was highly unusual, few suspected that it was a harbinger for the tragedy to come, like when the ocean water pulls dramatically back from a beach, people are so busy grabbing at the flopping fish, they don’t realize the massive tsunami strike to come. The entire flood ravaged area could have been evacuated long before Canyon Lake Dam gave way, long before hundreds of people lost their lives battling a twenty-foot-high wall of water. But who could know? People went about their business same as they ever did, lawns got mowed, mail got delivered, kids grabbed their hat and glove and pedaled off to Little League practice.

By late afternoon, the growing cloud cover grew ominous—churning clouds roiling up into a black cauldron that towered so high above the Black Hills, human eyes could not find the top of it.

There was an eerie, surreal glow to the evening light, and when the heavens finally opened up, the rain fell like no rain most people had ever experienced. You could not see out the windows of your home. High speed windshield wipers could not penetrate the deluge. To people standing under a car port, the rain sounded like the roar of jet engines. Even in the parts of the city which did not flood, the gutters could not contain the run-off, and both gutters melded together until streets were under several inches of water.

Canyon Lake was formed by an earthen dam constructed in 1938. It was 20 feet high and 500 feet long. The lake was much larger than it is today and had no island in the center. Long narrow docks ran far out over the water, and the generation that had survived the Great Depression and fought WWII and Korea, brought their kids there to fish. There was no curfew. People fished on the long docks until the sun came up, the red glow of their cigarettes forming twin dotted lines in the black of night. That night no one fished those docks, and the docks stood silent vigil as the dark, flood waters topped the fishing dock edges, eventually submerging them. A flash flood warning had been issued at 7:15 pm. Debris began to gather along the edge of the earthen dam spillway, hampering efforts to maintain the spillway flow.

By 10:00 pm water finally began to top the spillway, but even the overflow was not enough to contain what was flowing into the lake, and at 10:45 pm the dam collapsed, and the lake contents raced down Rapid Creek. Just after midnight, on June 10, a roaring wave of 50,000 cubic feet of water reached the grain elevator on the corner of Fifth and Omaha. Half of the wave split right of the elevator and destroyed the car lots along Omaha street well down past East Boulevard. The left half rejoined another huge wave that was already destroying the neighborhood where Central High School, the Civic Center, the Journey Museum and the Boys Club are now located. More than a hundred people had already perished west of the Gap, and now more than a hundred would perish east of the Gap. Before the flood waters had played out far past the Rapid Valley towns of Caputa and Farmingdale, 238 people would lose their lives.

The next morning, those who stood on the high ground of North Rapid looked down across a swath of utter destruction that ran all the way across south of Omaha Street. Only the foundations of buildings remained, basements filled with filthy debris laden flood water. Vehicles were lodged in the boughs of cottonwood trees ten feet off the ground. These trees had somehow survived, and many stand to this very day. Over 5000 cars were destroyed, and over 1300 homes. The property damage would amount to $160 million, that’s $1.2 billion in inflation adjusted dollars. The federal government would spend $165 million to help rebuild what was destroyed.

Experts on the radio declared the tragedy “a hundred-year flood,” meaning it happens once every hundred years. How wrong they were. That very next weekend, even more rain fell than on June 9, and the only reason hundreds did not die is all the flood areas were already evacuated. Only the Army Corps of Engineers mentions this second flood: “Eight days after the downpours that brought the flood-waters, there was again high water. In the early evening the rains came, and Rapid Creek went slowly out of its banks. Again, Mayor (Don) Barnett declared martial law, and low-lying areas were evacuated. While many people moved to higher ground, others sought the dangerous refuge of their roofs. Many of their belongings, which had been spread on lawns to dry, were again covered with silt. A panel truck carrying six people plunged into a ditch, and two of the occupants drowned.”
In the neighborhood where Green’s Moving and Storage would be built, the flood waters of June 9 failed to reach the nearby homes, but on June 17 they came right up into these houses and topped off at four feet up the walls.

These families found themselves forced into a refugee operation already a week old with most of the bed space and sparse amenities spoken for. For those who lived through both floods, the prospect of a hot and humid June rekindles the horror of those eight days. Waking up each June morning and casting a wary eye on the sky above the pine mantled ridgelines along the eastern edge of the Black Hills is a yearly ritual thousands still go through, because if history has taught the local folks anything. It is that a hundred-year flood can return in as little as eight days.

The post The flood of 1972 first appeared on Native Sun News Today.