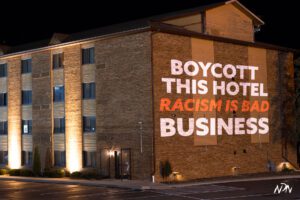 RAPID CITY—Quincy Bear Robe, 19 was charged with second degree murder and use of a firearm during the commission of a felony, for allegedly shooting Myron Pourier, also 19 on March 19th, at the Grand Gateway Hotel. However, the attorney representing him, filed a motion that may throw the entire case a curveball.

John Murphy, Bear Robe’s attorney, filed a motion on June 10th to suppress all statements, observations and physical evidence obtained from Bear Robe, on the grounds the initial seizure was “illegal” and “problematic.”

The motion, stating that law enforcement violated Bear Robe’s fourth amendment right to be free from unreasonable search and seizure, by lacking reasonable suspicion to believe criminal activity was afoot or probable cause to believe a crime had been committed, prior to seizing, detaining and arresting Bear Robe.

According to the Rapid City Police Department, officers were dispatched to the hotel at 1721 Lacrosse Street around 4:30 am that morning on March 19 for the report of a disturbance. Once on scene, they were notified a gun had been fired in one of the rooms. Officers then found Pourier and rendered first aid. After witness interviews, Bear Robe was arrested. Murphy declined to comment on the alleged rights’ violations beyond the motion’s wording, but he said the burden of proof is on the state to prove they did not violate his client’s rights.

“Once you (the defense) have made the allegation, it’s the state’s burden to call witnesses to establish that the seizure of the person and the solicitation of statements and search of areas was constitutionally valid,” he said.

The evidentiary hearing is set for 8:30am August 23, Hendrickson said he set aside half of the day for the hearing.

Free from prison, back into prison?

RAPID CITY—A Rapid City man decided to take an axe to parked cars in Sioux falls. Joseph Black Bonnet, 32, had just completed a sentence for damaging property and escape. The evening of Tuesday the 19, he was in the process of using an ax to smash up several cars in Sioux Falls about 41st street. Via a report from KELO-Land, the police discovered one car after another, about 9 pm, telltale ax marks in windshields, windows, taking it out on an SUV at a dealership. He wasn’t discriminatory, he would hit almost every part of the cars, from the quarter panels to the hood, in all. Eighteen cars in two dealerships were damaged in this odd form of road rage.

A manager for Audi Volkswagen, Kyle Kneip, gave a pretty comprehensive telling of the damage, “Interior got damaged when the ax went through the windshields, side panels, quarter panels, anything you can think of on the car he was hitting with the ax.”

Noting that due to the shortage of inventory, replacing the cars, won’t be an option.

“Imagine a car not being able to get a car, and that’s parts put together now we can’t get the parts for the cars that they can’t even build. So now sourcing the windshields and the hoods and the bumpers is something our body shop will have a fun time doing,” Kneip said.

It won’t be easy, but the businesses will do what they can to keep going. “Our business is key, and we got to get them fixed. Not only just the financial aspect of having them fixed but having the loss of inventory.” Kneip said.

Black Bonnet is now currently looking at a charge of aggravated intentional damage to property, and was found at the dealership, still holding the ax. Officers were able to take him into custody. Estimated damage to the cars is $100,000 while his bond is listed at $10,000.

PACTOLA—Last Tuesday saw a fun family swimming outing at Pactola Reservoir turn tragic. Darrell Saucedo, 35, Pine Ridge, reportedly started struggling while swimming. He slipped beneath the water and was under about 10 minutes when he was rescued, and medics were able to start CPR on him and find a pulse. Sadly, he was taken by Life Flight to Monument Health, where he was declared deceased.

Sean Forrest Hawk, 37, of Rapid City, was arrested after an early morning chase Friday from Box Elder into Rapid City. Hawk faces 11 charges, with aggravated assault against a law enforcement officer, eluding law enforcement-aggravated, driving under the influence and possession of a stolen vehicle.

Along with Hawk, two juvenile females were also in the stolen pickup, were charged with possession of methamphetamine. Hawk also had outstanding warrants for possession of marijuana and a felony warrant for bond revocation on possession of controlled substance charge.

Police had received a report about a stolen pickup, then tried a traffic stop at Cottonwood Drive and Line Road. When the driver took off, Police say the driver went off and on roads, through fields, fences and even yards on Radar Hill road.

After a short stop so the two girls could run, the driver intentionally rammed a police vehicle, then turned to run back into Rapid City via I-90. The pursuit ended in Rapid City, when the pickup got stuck in a drainage ditch near the intersection of Eglin and Lacrosse streets. After a short foot chase, Hawk was tased and arrested.