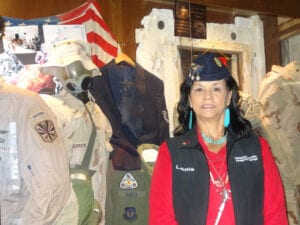 On May 21st, Lettie Irons Connell (Eagle Woman/Wanbli Wanyan) of the Standing Rock Sioux Tribe and her husband, Robert, a Vietnam era Navy Veteran were invited to a Memorial Day event at Cottonwood, AZ at the Verde Valley Veterans Memorial Cemetery.  To Lettie’s astonishment, she was called front and center to be recognized and honored for 18 years of faithful service to veterans, (mostly, but not exclusively Native Americans) as a Veterans Service Officer (VSO).  She was presented with a beautifully handcrafted plaque making her an honorary marine and a beautiful statue adorned by a feather.

“I thought I was going for other reasons,” she remarked and “it brought tears to my eyes.”  She jokingly added “Now maybe I have to start saying Semper Pi instead of Anchors Away.”

Connell, of the Standing Rock Sioux is part of the large Irons and Waggoner families, more specifically a descendant of Josephine Waggoner, a Hunkpapa historian. Though she has lived off the reservation, Eagle Woman keeps in close contact with her Lakota relatives. Raised to honor the military tradition, she is very proud to be of service to other Native Vets.  “There are probably a lot of guys from Indian country who could use some help too,” she remarked “and I’d be very happy to do that upon their request.”

Technically retired from a career in law enforcement, (the first woman sergeant in the Los Angeles area) Lettie has devoted the last 18 years to volunteer service as a Veterans Service Officer (VSO) helping veterans obtain service-connected benefits, literally helping thousands over those years.  Four years ago, she went through the rigorous testing to become accredited by the Department of Veterans Affairs as a VSO/ Claims Agent.  She is the primary person assisting Veterans from Hopi, Dine’/Navajo and the Yavapai/Apache Tribes, though her services are available to all Vets, regardless of nationality.

Based in Camp Verde, Arizona, she maintains a home office where she is “constantly on the computer” researching and advocating Veteran cases and coordinating required medical exams. She works closely with American Legion Post 93, where they made an exception by naming her as a non-Vet to serve as the Post VSO for the past five years. The public library at Camp Verde also provides her an office at no cost where she can meet personally with Veterans by appointment.

Being accredited means that Connell can fully access the complete records of Vets to better assist them in getting service-connected benefits. “I look at everything to make a good appeal” she says. “Many important things are sometimes overlooked or ignored by the bureaucracy.”

Connell also works with veteran families and dependents to help them with survivor benefits such as CHAMP VA medical insurance.   She has just taken on a particularly challenging case for the widow and six children (two adopted) of a Marine from Yavapai/Apache who served four tours in Iraq and Afghanistan leaving him 100% combat disabled.  Sadly, he recently perished due to COVID made so much worse when the VA denied survivor benefits concluding he did not die of service-related injuries.  “We’re going to prove them wrong,” Connell stated confidentially.  If his immune system had not been weakened by his disabilities, this would not have happened.”

She explained that it is quite common for the VA to deny most claims filed by Vietnam era and other disabled Vets who then find it difficult to appeal, usually overwhelmed by the paperwork and bureaucracy. Lettie particularly enjoys working with Veterans who served so honorably.  Under the NEMER law, the VA is required to make back pay to the initial date of application when service-connected disabilities are rated, provided there is an initial claim which was denied. “Some of the Vets I’ve helped have received hundreds of thousands in backpay going back to the first date of application in the 1980’s and 90’s” she said.

At any given time, Connell has about a hundred open claims, on average making significant progress five or six or per week. She mentioned a recent case result which was very satisfying to both her and her client, an 87 year old Korean Veteran who just now got approved for service-connected disability.  “No one ever took the time to help him before” she sadly noted.

Connell regards each case as a personal challenge and is doggedly persistent to get her veteran clients “what they rightly deserve and sacrificed for.”  Her services are available to all Veterans regardless of location or nationality. With the computer and telephone, we can get things done long-distance,” she says.  Once a Veteran signs a required VA form to request that Lettie represent them, she goes to war for them. She can be contacted at ljconnell@yahoo.com… Once she represents a Veteran, like a dedicated soldier she “never let’s go or stops” on a case.

On behalf of Veterans everywhere we salute her selfless volunteer service.