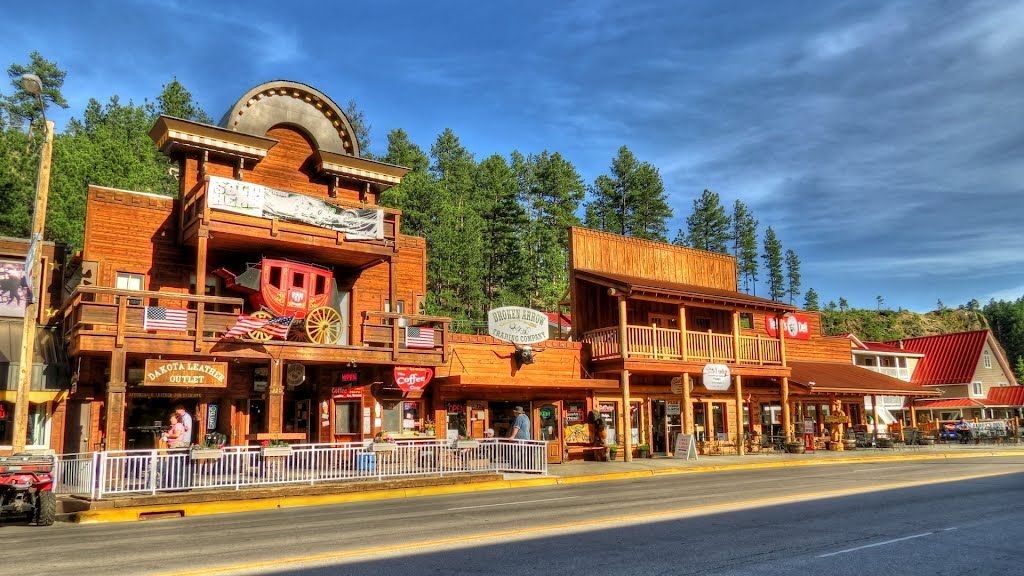 Locals know Keystone as the town at the base of Mt Rushmore, the home for Taffy, and Old Time Photos, the lead-up to the Pigtail bridges off Iron Mountain road and rows of stores along “the Strip”, made up to sell all sorts of items ranging from Coca-Cola to teddy bears to crystals. If you look hard enough, you can even find Native American merchandise, historical items and meet folks from all over the world.

However, the history part predates tourism, which didn’t really get a start until the carving began in the 1920s, and the traces of the town can be dated back to the discovery of gold ore…and a settlement called Crossville.

Fred Cross, a settler located a mile north in Buckeye Gulch had arrived in the local area, dating back to 1877, and over the time, had found several rich samples of Gold from Mining properties. This was 3 years after Custer led an illegal party into the Black Hills, to confirm what was already known, the presence of Gold. This first site, would be called Crossville…the next area to make headway, was a company called the Harney Peak Hydraulic Gold Mining Company, using a Hydraulic process on deep gravel beds in 1883. This project, consisting of six miles of property and two flumes, close to the Grizzly Bear and Battle Creek, was designed to work the main diggings downstream, and produced considerable gold in an 18 month period.

This would lead to what was known as the Mitchell Bar, but the same year, another material would be found and mined, at the nearby Etta Mine.

South of the Etta Mine, tin was discovered. This discovery led to the development of the Harney Peak Tin Company, from stockholders on both sides of the Atlantic in England and America. Two million dollars were spent in the area to develop over 1100 mining locations and three reduction plants, putting gold in the back seat, as the company paid good wages.

In 1891, William B. Franklin, Thomas C. Blair and Jacob Reed would locate the Keystone Mine, and named the new community after the mine. Reed platted the original site, and the town would grow slowly until a discovery of the rich ledge of gold-bearing Quartz at the base of Mt. Aetna. The new claim, was discovered in 1894 by Franklin and his adopted daughter Cora, and the joke was he named it after his wife in tribute…on occasion, she would drag him home by the arm, commenting to friends, “Ain’t she a holy terror?”

The mines, the Holy Terror and the Keystone would eventually merge with shafts connected by drifts, but would operate their own separate mills. As these two mines flourished, dozens of other smaller mines would pop up, with a variety of mineral wealth to extract. The influx of miners, and the need to meet, saw the area grow beyond 2000 people, larger than nearby Rapid City. The railroad would arrive in 1900, helping development, and in 1903, the Holy Terror would reach a depth of 1200 feet. However, the mine would start running into problems, ranging from underground water, litigation for deaths and claims from previous locators, the mine ceased to operate for a number of years. The area saw a depression, and like other towns in the Black Hills, fire would become an existing problem, with four fires raging through the town site, in 1908, 1917, 1921 and 1937. The last one, which destroyed a good portion of the business section on 1st Street, let to the townsfolk to establish the Keystone Volunteer Fire Department.

While gold was on the downswing, other mining operations did flourish in its place. Feldspar, led to a grinding plant set up near the two creeks again. Arsenic, found with gold nearby, prompted the construction of a reduction plant near the railroad, to help remove both. The gold value was obvious, while the arsenic would be transported to the south to combat the boll weevil infestations that plagued the southern states. Over 100 workers worked the bullion mine in 1924.

In 1927, carving for Mt Rushmore would begin, aided by the railroad serving the town site, and would also employ 25-30 men until 1941. Towards the southern end of modern Keystone, production of rare minerals would see an uptick, with discoveries like feldspar, cassiterite, tantalite, columbite, and others, from the Peerless, Etta, Hugo and Bob Ingersoll Mines. These rare minerals had the added benefit, while gold mines would be shuttered during World War II, rare mines saw their peak during the same war.

Keystone, to that end, saw the gradual decrease in pegmatite production, the feldspar grinding plant was destroyed by a fire in 1957, and the rail link to Keystone, with a good portion of downtown, in the 1972 Flood.

Modern Keystone, as it now sits, is majorly powered by tourism dollars. Stores, ranging from coffee shops, toy places, restaurants and tourist gifts are pretty easy to find. At the traffic light from Rapid City, if you go straight, you find the Strip. If you turn, you’ll find the old town of Keystone and it’s worth a small drive.

In Old Keystone, you’ll find the original Halley’s Store, a business which has been in operation since 1896, offering a variety of odds and ends. Up above the town on the left, you’ll see the large Keystone school, built in 1899. The school would serve students until 1988, it now serves as a museum for the town.

Keystone would not incorporate as a town, until June 8th, 1972…the very next day, the massive rainstorm that would flood out Rapid City, Sturgis, Nemo and other towns, would hit Keystone as well, flooding out a good portion of the Strip. A campground, set up by the now-Borglum Story, saw eight campers drown, when the flash flood caught them, still in their sleeping bags. Other portions of the town suffered as hotels would be wrecked, houses smashed and debris would flow down the canyon.

A good 90 percent of Keystone is surrounded by canyon walls, and trying to turn the flood plain into a greenway, simply wasn’t possible. The town, which had seen multiple fires and spotty flooding in its history, simply started repairing the damaged structures, while other buildings, that were destroyed, would be replaced later on.