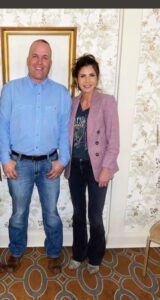 With the Indian Child Welfare Act on the line, South Dakota recently had a Senate candidate on the Republican ticket who was accused of sexually assaulting an adopted child in his care.

The adopted daughter is reported to be a Native American.

Joel Koskan, from Wood, was a candidate on the Republican ticket in District 26 when he was arrested just days before the Nov. 8 election.

Koskan was charged with a Class 4 felony for “exposing a minor to foreseeable harm.”

The Mitchell Republic reports from court documents they obtained in the case that a 19 year old woman came forward in May of 2022 with reports that Koskan had been “raping her since she was a young child.”

The woman alleges that Koskan’s began grooming her by having her sit in his lap, kissing her and giving long hugs soon after she arrived with the family when she was just 12 years old.

Although she said she thought these actions were normal, she learned soon after attending summer camp when she was 14, that Koskan’s behavior was inappropriate.

The woman said she informed camp counselors who contacted the Department of Social Services. However no case was ever made, because she decided not to cooperate with DSS.

The woman reports that after the incident, Koskan’s installed a camera in her bedroom.

As she grew older she claims Koskan would require her to take showers and switch from wearing shorts to a nightgown without underwear and made her straddle him after showering, exposing herself to him court records state.

When she was 17 years old, the woman claims Koskan penetrated her with fingers for the first time at his home in Wood, South Dakota. The woman said that touching led to sexual intercourse, which took place “many times.”

Court records also claim Koskan controlled her social media accounts, monitored her whereabouts via GPS and camera systems, required nightly phone calls and even made decisions about what she wore.

DCI agents who investigated the case and members of the Internet Crimes Against Children Task Force found evidence to support the woman’s claims and also found that when the woman first went to the sheriff’s office to report the abuse, Koskan texted, “You promised you’d never do this, I’m begging you, you don’t want to do this.”

Koskan was arrested Thursday, Nov. 3 with his first court appearance scheduled the day before elections. Koskan has since deleted his Twitter account and made his campaign website private.

Randy Seiler, South Dakota Democratic Party Chairman, called for Koskan to immediately end his campaign, “These allegations concerning Joel Koskan are deeply disturbing, and he should immediately end his campaign. While he will still appear on the ballot, the choice for the voters of District 26 couldn’t be clearer. Partisan politics aside, Joel Koskan should not be voting in the legislature on issues that affect South Dakota kids — or any issues at all.”

GOP Chairmen Dan Lederman appeared to want to put distance between the Senate candidate and the Republican Party when he stated, ““The allegation against Joel Koskan is very serious, and the South Dakota Republican Party unequivocally opposes child abuse in all forms.”

However Koskan’s name did appear on the ballot below his Democratic opponent, Rosebud Sioux Tribal member Shawn Bordeaux.

Bordeaux overwhelmingly defeated Kostans with 58.3 percent of the votes to Kostan’s 41.7 percent. Even with Kostan’s pending sexual abuse charges, he still managed to rack up 2,495 votes in his district.

This case brings to mind the Indian Child Welfare case being argued before the U.S. Supreme Court. While opponents of ICWA argue the law is race based and therefore unconstitutional, South Dakota tribes battled for ICWA to be implemented in cases involving the placement of Indian children. The case, OST et. al vs Van Hunnik et. al., was filed several years ago by ACLU attorneys Dana Hanna and Stephen Pevar on behalf of the Oglala and Rosebud Sioux Tribes, Madonna Pappan, and Lisa Young.

For those who’ve lost their Indian children to a system that steals their identity, culture and connection to their families of origin, and then subjects them to a foster care system where many may languish unconnected for decades, where some become the victims of abuse, the Indian Child Welfare Act appeared to be a Godsend.

Indian families were fighting back and hoped the case would offer some relief. However plaintiffs lost the case and children continue to be placed outside their families of origin at an alarming rate. Sixty percent of children in the foster care system in South Dakota continue to be Indian.