As temps rise, so do levels of water protector arrests in Minnesota 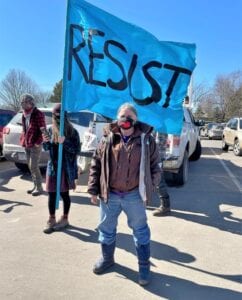 Michele Naar-Obed outside Aitkin County Jail March 19: She was held in custody three nights for what turned out to be a junk warrant. COURTESY / Resist Line 3

AITKIN COUNTY, Minn. — Spring is bringing the heat to opponents of the Enbridge Line 3 tar-sands oil pipeline, as levels of arrests and citations for demonstrations against the private Canadian infrastructure project rise faster than at any time since construction began on it in December.

The toll on the self-proclaimed water protectors stands at more than 200, higher than for any oil pipeline opposition in the country since the Dakota Access Pipeline resistance of 2016-2017. As ground and waterways continue to thaw, increased numbers of opponents and arrests are expected.

Not all detentions in the escalating law enforcement suppression response are legal. Take Michele Naar-Obed’s recent arrest for example. She was held in custody three nights for what turned out to be a junk warrant claiming her attendance at a March 3 public action violated the conditions of her release from a previous Line 3-related charge.

Officers issued dozens of citations at the event, a gathering to commemorate the 30th anniversary of the 1991 Line 3 oil spill in Grand Rapids, Minn. In the disaster, the line now being replaced burst and spilled 1.7 million gallons of crude oil onto the frozen Prairie River. The calamity vies with that of the Enbridge Line 6B rupture, — which flushed another million or so gallons into Michigan’s Kalamazoo River in 2010 –, for the title of largest inland oil spill in U.S. history.

“I’m being accused of breaking the law for participating in First Amendment activities,” Naar-Obed told sympathizers outside the Aitkin County Jail as she went in to contest the warrant and request an audience with a judge.

Noting that she received no hearing, she added, “I haven’t been given the opportunity to defend myself, yet I’m being asked to pay a $500 bond or surrender my freedom.” With no verdict in her case, she also asked, “In this country, aren’t we still presumed innocent until proven guilty?”

After a judge ruled that the warrant for her arrest was unlawful, she walked out of the jailhouse March 22.

Then on March 25, seven water protectors were arrested at a construction site near Floodwood, Minn. – six for locking themselves to construction equipment and an access gate, and one for refusing to leave the work site. Six of the seven traveled from out of state. Warmer temps have brought in more opponents from across the country, including activist and actor Jane Fonda.

“The water protectors are being seriously harassed, jailed and strip-searched by the local police,” said Fonda during her visit. “It’s a terrible thing that’s happening here.”

The growing resistance is led by Indigenous grassroots groups whose adherents see the construction of the pipeline as a violation of treaty rights. They say a spill would devastate wild rice lakes and other waterways in treaty territories where the Anishinaabe have the right to hunt, fish, and gather.

Opponents are also concerned about the impact of the project on climate change. Oil from tar sands is one of the world’s most carbon-intensive fuels.

On March 28, dozens of Line 3 resisters marched through downtown Duluth, Minn. to a Wells Fargo branch office, drawing attention to the bank’s investment in fossil fuel infrastructure projects like Line 3. Across the street from Wells Fargo, they dropped a banner from a parking garage that read, “Stop Line 3 For Future Generations!”

A water protector from the assembled crowd declared, “This bank feeds all sorts of money into that black snake. We’re going to lop the head off of it; there will be nothing left when we’re done. We fight with a prayer in our hearts.

“Prayer is action. Prayer is gathering together in community like this. It’s taking care of those that need help, realizing that true wealth comes not from money but from kindness and generosity and lifting up our fellow people.”

A recent report identified Wells Fargo as the bank with the third most fossil fuel investments in the world; it is also a lead financier of the tar sands industry.

The post As temps rise, so do levels of water protector arrests in Minnesota first appeared on Native Sun News Today.