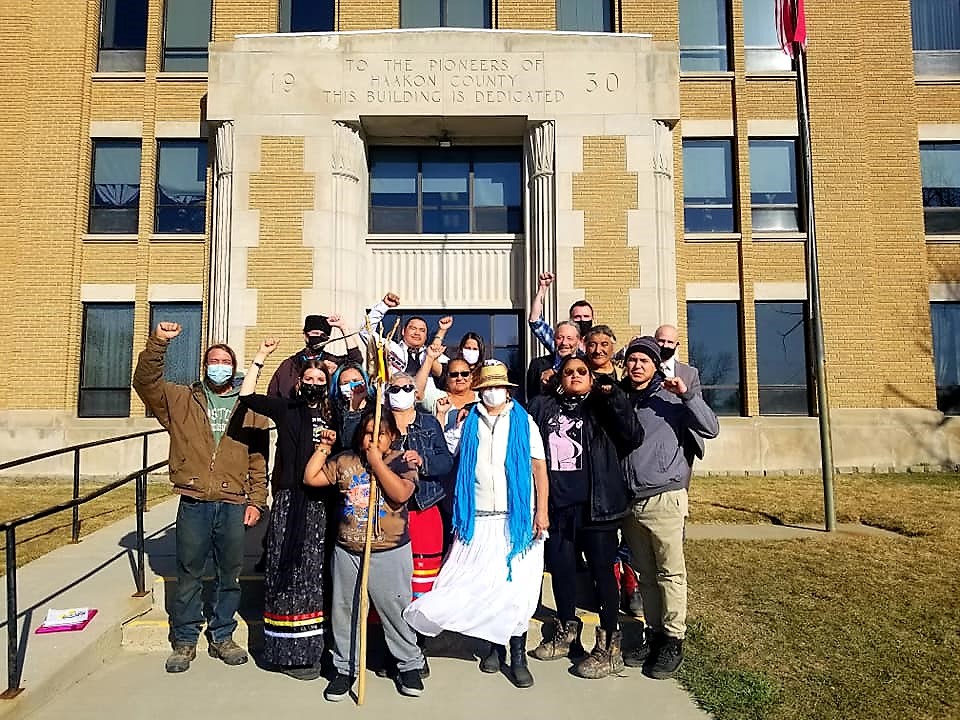 High Elk had to pay a $10,000 cash bond for his release Jan. 6 from the county jail on that and another first-offense felony charge, as well as 11 misdemeanors, which could result in a prison sentence of nearly two dozen years and fines up to $48,000.

Charges stem from incidents Dec. 23, when participants in the annual Big Foot Wounded Knee Memorial New Generation horse ride were at the camp on the Cheyenne River Indian Reservation.

In the March court date, Judge Kathleen Trandahl dismissed a felony indictment of aggravated eluding. She set another court date April 28 for an aggravated assault felony and the misdemeanor charges, ranging from disorderly conduct to moving vehicle violations.

Assigned as prosecutor is Marty Jackley, a former State Attorney General, who has announced he is running for the position again. Defense attorneys are Bruce Ellison and Robbie Rohl.

Following the court date, she is collaborating with the Standing Rock Youth Council’s caravan to Washington, D. C. to lobby the Administration of U.S. President Joe Biden for a shutdown of the Dakota Access Pipeline and Enbridge Line 3 construction.

“For too long, Indigenous communities have been forced to bear the burden of society’s addiction to fossil fuels and the devastating impacts on our land, sky, and water,” said well-wisher and youth action advocate Joye Braun, a Cheyenne River Sioux pipeline organizer for Indigenous Environmental Network, which is funding the caravan.

“It’s time to honor our treaties that have been ignored and shut down DAPL and stop Line 3,” she said in a social media post.

Biden fulfilled a 2020 campaign pledge to retract the KXL Presidential Permit in January. However, High Elk vows to maintain the Roots Camp until contractors remove the installations nearby on the route’s Cheyenne River crossing and the court case is resolved.

After his hearing, Rosebud Sioux water protector Cheryl Angel, a great-grandmother who was among supporters attending, showed media a thick sheaf of more than 4,500 signatures collected since Jan. 21 from all over the country and the world on a petition to drop all charges against him.

Speaking alongside the 30-year-old husband and father, together with his mother Vivian High Elk, Angel expressed the feelings of many, when she said, “We stand with the authority given to us by the Creator since our conception to be the caretakers and the maintainers of peace on these lands.”

Referring to the Lakota Nation, she continued, “We were granted and authorized to maintain that peace, not just live in peace. That means keeping out all destructive forces of that peace, which includes pipelines, gold mines, uranium mining and any extractive activities that are going to damage the water that we drink, that the animals drink, and that plant life needs, so it can sustain all life, especially on unceded treaty lands.”