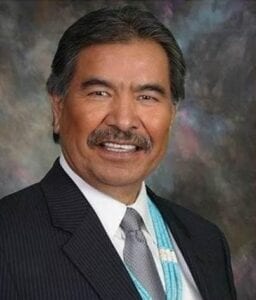 “On behalf of the National Indian Health Board, my heart and prayers go out to Albert Hale, his family, and to all who knew Albert. As a fellow Tribal leader and Vice President of the Valdez Native Tribe, I know the steadfast strength and courage it takes to stand up for our people and make their voices heard. He was a true warrior for Indian country.”

On February 2, 2021, Mr. Albert Hale passed away at the age of 70, due to complications from COVID-19. Hale was born in Ganado, Arizona in 1950. He was Áshįįhi and born for Tódich’ii’nii. His maternal grandfather was Honágháahnii and his paternal grandfather was Kinyaa’áanii. He served as the President of the Navajo Nation from 1995-1998. He later served as a member of the Arizona State Senate from 2004 to 2011 and with the Arizona House of Representatives from 2011 to 2017. Both the Navajo Nation and the State of Arizona will fly their flags at half-mast for four days in his honor. Albert’s daughter, April Hale, is a full time Media and Communications Consultant with the National Indian Health Board and she owns her own firm, AHalePR. In the past, Ms. Hale worked full time for NIHB in Washington, DC as the Tribal Health Reform Outreach & Education Communications Coordinator.

Ms. Hale spoke at her father’s memorial service on Friday, February 5, 2021, stating, “My father was a traditional man. We will continue the traditions in our communities, in our families and in our work advocating for Tribal communities. My father worked to ensure that our Diné people would grow prosperous and strong. I heard many stories of my dad of how he was such an incredible leader, he was a visionary, he was fearless, he could walk into a room with dignitaries, federal agencies, or Members of Congress and he would not back down. He was fearless because he knew in his heart that his job was to protect the Diné people.”

NIHB Navajo Area Representative and Navajo Nation President Jonathan Nez offered his thoughts on Albert Hale. “On behalf of the Navajo people, I offer my heartfelt condolences and prayers for the family, friends, and all who had the honor of knowing our great leader, Albert Hale. Ahbihay, as many knew him, was my brother by clan and he always greeted me with a big smile and a hug as he did with everyone he knew. Throughout his lifetime, he demonstrated his love and compassion for our people through his service and all of his great contributions as President of the Navajo Nation, as a member of the Arizona Senate and House of Representatives, and at the federal level. He stood strong on many issues and left the world a better place than he found it. We will miss his presence, but we take comfort in knowing that he is now with our Creator.”