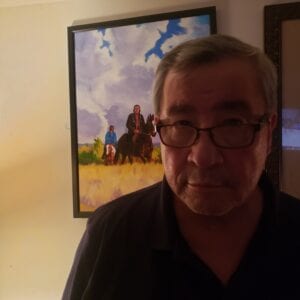 Native Americans are often encouraged to seek and heed the advice of elders, a hallmark of respect in our culture. Henry James, “aka Jim” has done that.  As a young man, he took his grandmother’s advice seriously, “If you cannot feed your family, you are not free,” she often reminded.

Another prominent elder to influence Jim was his great-great-grandfather Red Leg, one of the Santee Chiefs at the Santee Rebellion of 1862 who survived and then converted to Christianity.  Red Leg passed advice which still echoes in the James family: “Be generous and kind. Always help those less fortunate.  You must be strong to do that and able to care for your own first.”

Jim shares a story of early reservation days which has been passed down in the family.  When Reg Legs found out that kin at the Crow Creek Reservation were starving, he organized a buffalo hunt, somehow finding some of the last of those magnificent creatures yielding meat which he personally delivered.  Conditions at Crow Creek were so horrific that the women picked corn kernels from cow manure to make soup.  Then that reservation, like many in the Great Plains was leased to large non-Indian ranchers who paid a pittance.

“Whenever, I think of that story, I realize we are not so bad off,” Jim noted.

Thus, as materially poor young man, James was gifted by family traits that have served him well:  honesty, integrity, a hard work ethic and the desire to help other Indian people.  However, when he started his adventure as one of the first large Indian construction contractors in the late 1970’s there were few mentors; he and a hardy handful of like-minded people across the country were traveling a new trail, figuring things out as they went.  While many failed, others, such as James succeeded. “I think we saw the opportunities and managed to take advantage of the help offered.” he remarked.

Though now retired, James still sees much opportunity for enterprising young Indian people.  Thus, he shares some insights and recommendations learned from his 30-year success story.

Develop skills to make choices: “You don’t have to stay on reservation,” James said.  “If you do decide that it is fine, but then you should work to make it a better place for you and your family, more homes, better jobs etc.  But you shouldn’t feel you have to stay there.  In order to leave, skills and education are necessary, and you must pay your own way.  It’s not always easy.  I, for example was born and raised on the reservation and after high school went to college, which was too intimidating.  I had low-self-esteem and did not know how to handle the prejudice, being called ‘Chief’ and all that.  The Army provided me with education and skills – a chance to be successful.  That is one option some could consider.”

Take Advantage of Indian/minority preference:  Indian preference programs still exist, he reminds, and a first step is to gain certification with your own Tribe and then other federal and even State agencies.  “That will get you the lists of jobs and it is possible to be 100& Indian owned and operated,” he stressed. “The days of fronts are coming to an end. Indian owned and operated from the top down is what I like to see.”

Promote your business:  While developing a good working relationship with your own tribe is essential; contractors must also generally travel to other locations for jobs.  The quality of your work will speak for itself and word-of-mouth is powerful, but advertising is also necessary he recommends. In his case he credits former Ft. Peck Tribal President Norman Hollow with helping him expand after a first successful big job on that reservation.

Jim mentioned his company logo which came to him in a dream – a vision.  It features a colorful sunburst of color with the outline of an Indian whose hands are tied behind his back.  “What I see is a bright future for Indian people,” he predicts. “We just need to break the bonds of poverty and prejudice.”

Network/develop working relationships: All agencies have an ‘Indian desk’, he says, that is overseeing minority contracting.  “Get to know these people, ask for their help and advice. That’s why they are there.”  He recalls John Catta, a Hopi Indian in the southwest who held that position and was extremely helpful to him. Though you don’t want to become a ‘conference’ Indian, attending some conferences and training sessions is a good way to make valuable industry contacts he remarks.  “They like to know who they are dealing with.”.

Creative Financing:  Contrary to public opinion, forget about grants, Jim noted. Getting financing for larger construction projects is a real challenge.  He recommends the BIA and SBA Loan guarantee programs which he has used to good effect.  Much paperwork, including the formidable Business Plan, is required, a particularly good idea in his opinion noting that there are now a variety of technical assistance organizations which will help with that. Suppliers, such a lumber yards are also good sources of credit from his experience.  “Give the local businesses a chance, they need to move their product too and are often easier to work with than big chain outlets.”

Give Back: The easiest way for a to give back through construction is to provide well-paying jobs to tribal members, according to James.  “There is great skilled workforce of Native people on every reservation and the funds are meant to help Indian people he stresses.  “It is also critical for the owner or the boss to work right alongside of his crew.” He also urges contractors to actively support and use Tribal Employment Rights (TERO) programs. “They know who the good workers are. And remember that every Tribe has an annual celebration where donations are very much appreciated.”

James now makes his home in Lincoln, Nebraska in order to be near his children, grandchildren and other family. One of his sisters Meredith DeCora who also lives there recently retired from 43 years with the railroad.  In her youth she was Miss South Dakota, another success story.  Jim still sings in the choir based on his experience as a tribal college history instructor, and book about the Santee Sioux is in the back of his mind. Clara Caufield can be reached at acheyennevoice@gmail.com.