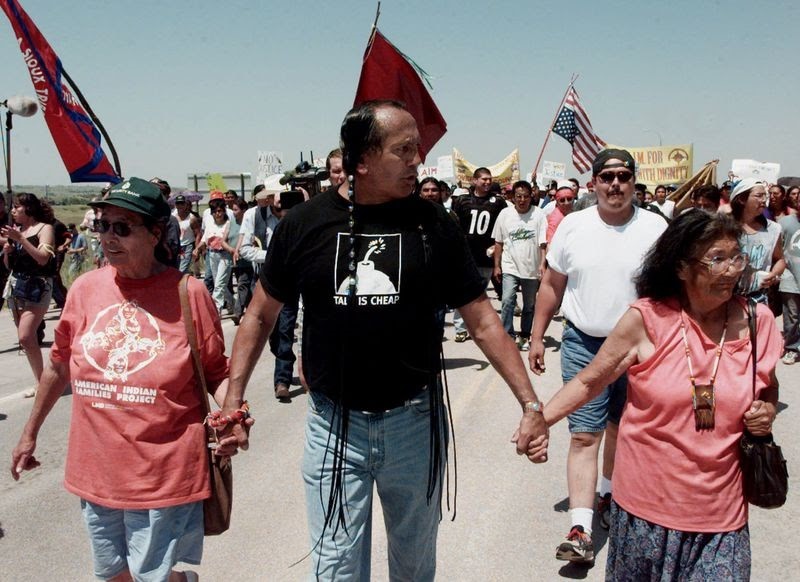 PORCUPINE – Group buys 48 acres in Whiteclay. The parcels purchased are located on the east side of Highway 87 across from the Oglala Sioux Nursing Home and former Lakota Hope Center. A limited liability company owned by John Maisch, who currently serves as an Associate Professor of Legal Studies at the University of Central Oklahoma, purchased 16 acres in summer 2020 and secured a purchase option on an additional 32 acres later that Fall.

For decades Whiteclay, an unincorporated border town to the Pine Ridge Reservation, was home to four liquor stores that sold over four million cans of beer every year. Most of these sales were made to residents of the Pine Ridge Reservation, which prohibits alcohol sales. In 2017, after years of pressure from grassroots organizers, the beer stores were permanently closed by the Nebraska Liquor Control Commission.

Maisch expressed his appreciation for the moral support of several Whiteclay activists and Jennifer LaMere, daughter of Whiteclay activist Frank LaMere, who died on June 16, 2019, two years after Whiteclay’s beer stores were closed by the Nebraska Liquor Control Commission.

“The transfer of 48 acres of Whiteclay property to an Oglala-led organization is the first step to mitigating the harm caused by decades of beer sales in this unincorporated border town,” said Maisch, who currently serves as an Associate Professor of Legal Studies at the University of Central Oklahoma. “But it’s only a start.”

“Frank LaMere spoke about mitigation and the importance of returning Whiteclay to the Oglala people after the beer stores were closed,” Maisch indicated. “I hope he would have supported this move.”

Reflecting on the decades of work that led up to this purchase, Thunder Valley’s Executive Director Tatewin Means said, “As children of revolutionaries, it’s up to us to carry on their work in our own way. I remember the protests in 1999, when my father, Frank LaMere, and so many others marched on Whiteclay, knowing they’d face police in riot gear.” Her father, the late Russell Means, was a prominent leader in the American Indian Movement (AIM). He was arrested that day alongside LaMere and 7 others protesting against the beer stores.

Closing the beer stores in 2017 was the start of a transformation for Whiteclay. “For decades this town was a place of despair and violence,” Means recalled. “By acquiring this land and working to provide transitional and permanent supportive housing with easy access to mental health and addiction services, we are changing it into a place of hope, rooted in our Lakota Lifeways.”

This transformation has taken years, and the work of thousands of activists. “The key to this all is collaboration.” Means explained, “We are incredibly grateful to our allies from other nations: Frank LaMere (Hochunk) and John Maisch are two who have worked deliberately for years to help return Whiteclay to the Oglala Lakota and make it a place of healing.”